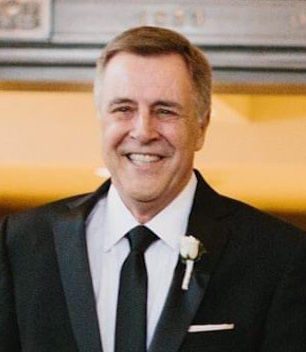 AT is survived by Pandora, his wife of 41 years; and his 3 daughters, Ashley (Mark) VanDellen, Mollie (Troy) Blasius, and Hannah (Ben) Rosema. AT was proud to be called “dad dad” by his 5 grandkids, Graham Payne Blasius, Sutton Keaney Blasius, Emerie Anton Blasius, Alpha Jay Rosema, and Benjamin Alan Rosema Jr. AT is also survived by his sister, Miki (Roger) Hempleman; niece, Ellen (Brandon) Akey and their children, Piper Leigh and Andrew Thomas; and nephew, Tyler Hempleman.

AT lived up to his name Alpha as he always found himself at the head of the pack. He was a basketball star in high school and played at Denison University where he graduated with a business degree. AT also excelled as a salesman early in his career before moving to Grand Rapids where he had a long, successful career at Wolverine Worldwide and retired at 61 ahead of schedule.

AT was a fighter. He battled cancer for 21 years and only those closest to him would ever know he was sick. AT’s lifelong goal was to give his girls the best, and true to form, he exceeded all expectations.

A private memorial service will be held to celebrate AT’s life and lasting impact in this world. In lieu of flowers please make donations to Trillium Woods (FaithHospice) or the American Cancer Society.