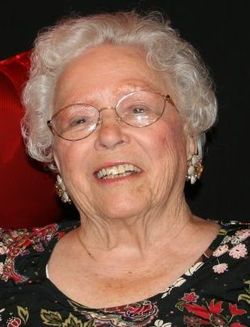 Althea “Lorraine” Hurst, age 97, a long-time resident (44 years) of Big Rapids, Michigan passed away peacefully at Blodgett Hospital surrounded by her children on the evening of October 30, 2015. Lorraine was born in Havana, Illinois on September 25, 1918 to Paul and Nelda Burgard. She was the first daughter of three girls in the family, and became “the boss” in many ways… the funniest was renaming her youngest sister, Betty, a name that stuck with her the rest of her life. She married Nelson Kie Hurst on August 17, 1940 and soon after he was off to war in the Navy serving as a Radioman 1st Class on the Admirals Ship the USS Eldorado.   She began her working career as a comptometer operator for Caterpillar Tractor& was later a bookkeeper at a Peoria department store.  When four children arrived within a four year span, including twin boys, her focus then became a full time “homemaker”, mother and wife.   After moving to Big Rapids in 1954 when Nelson was hired to teach radio and television electronics at Ferris Institute, she became a Girl Scout Leader and participated in United Church activities as well as supporting the family in Boy Scouts, Band, and various sports activities.  She took the time to write her Mother a letter daily sharing her busy life.  Another devotion of her life was involvement with Mecosta County Extension, where she enjoyed many hours of camaraderie while incorporating her creative talents in crafting, sewing, cooking & enjoying socials & various travels around Michigan. As the family matured, she again worked outside the home at Ferris State College, GoodHousekeeping Furniture Shop, and owner/manager of Montgomery Wards Catalog Store in Big Rapids until retirement. Upon moving with her husband to Whispering Woods Retirement Community in Grand Rapids, Michigan she was encouraged to write a monthly column for the Newsletter.  The column, “Down Memory Lane”, focused on memories of long ago as she was growing up, personal family antidotes & stories of various lifetime experiences.  She LOVED to sing the old songs and often had the dining room singing.  She enjoyed telling stories, reciting poetry and was “famous” for her jokes……often times repeated! In Big Rapids she was a long time member of the United Church.  After moving to Whispering Woods she  loyally attended Sunday services in residence. Lorraine was preceded in death by her husband, Nelson Kie Hurst, her parents Paul & Nelda Burgard, two sisters…Ester Eileen Spears and her husband Al Spears, Vivian Geraldine Orth (Betty) Delk and her husband Irving Delk.  She is survived by her children Phyllis E.Langlois (Mark) of Las Vegas, Nevada, Thomas P. Hurst (Christine) of Mesa, Arizona, Timothy P. Hurst (Laura) of Cleveland, Ohio, and Philip N. Hurst of Kirkland, Washington, 12 grandchildren, 21 great-grandchildren and one great-great grandchild.  Her close cousin, Janet Steele Mick (Gail) of Kalamazoo also survives and has served Lorraine throughout her life.  A Memorial was held on Sunday, November 1st at Whispering Woods with family and friends in attendance.  A life video was shown and guests shared memories and stories of Lorraine.  She will be interred beside her husband Nelson in Glendale Cemetery, Washington, Illinois.  Condolences and memories may be left at O’Brien-Eggebeen-Gerst of Grand Rapids. Suggestions for Donations in Lorraine’s memory: Michigan Extension Association of Family Consumer Science (MEAFCS) may be sent to Betty Goldammer, 220 Morrison St, Big Rapids, MI49307, American Diabetes Association (ADA), or Shriners Hospitals for Children