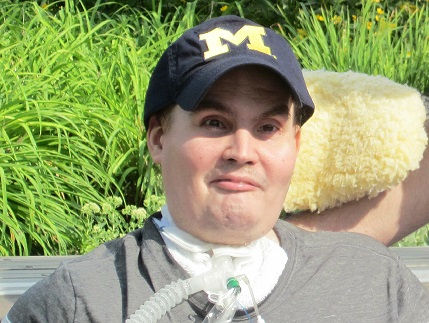 Alvia was born on February 2, 1975 to Maynard and Vicki (Komm) Glidden. He was preceded in death by his mother, who devoted her life to caring for him at home until she lost her battle with breast cancer in 2006. Alvia is survived by his father, Maynard (Lucinda Glidden), and his brother, Matthew (Andrea Glidden).

These are three words, of many, that describe the life of Alvia Glidden.

Even at a young age, he had a love for life and a strong faith as one of Jehovah’s Witnesses. As a teenager, he was interested in lifting weights, playing basketball, and running. He had a keen mind for the sciences, such as astronomy and chemistry. Alvia also became an excellent musician and spent many of his early years developing his skills on the piano. Mastering a piece called “The Flight of the Bumblebee” was one of his greatest achievements in music. His interests also extended to learning American Sign Language, which proved to be an invaluable means of communication for him in the future.

Baptized as one of Jehovah’s Witnesses at the age of 14, Alvia spent much time telling others about God’s purpose for the earth and about the good news of God’s Kingdom that he had learned about (Revelation 21:3, 4). He was known to volunteer his time in the ministry work and, on many occasions, devoted 60 hours in a single month, doing so.

During the summer prior to his senior year of high school, at the age of 16, Alvia was diagnosed with a malignant brain tumor. Emergency surgery became necessary. Post-surgery, he remained in a coma for three weeks, but, ultimately, the surgery left him in a quadriplegic state. Alvia spent close to a year in the hospital, undergoing radiation treatments to eliminate the cancer. Although the cancer never returned, he spent the next 30 years on a ventilator and never fully regained many of his physical capabilities. He wasn’t able to talk or eat normally, and was confined to a hospital bed or wheelchair. Despite this situation, though, his spirits remained high, his mind remained sharp, and his sense of humor was fully intact. Also, his Bible-based hope of perfect health and true happiness in the future became stronger than ever. Due to his strong personal relationship with God, Alvia always said that he never felt alone.

In June 1993, Alvia proved he was determined to graduate with his class at Onsted High School. In the preceding months, he had worked with tutors at the hospital and earned the right to receive a diploma. Although confined to a wheelchair, he was present with his supportive classmates and received a standing ovation. His story was even featured in the local newspaper.

In the years that followed, Alvia was known to engage visitors in Bible trivia or discuss things he researched on in the Bible and on the website, JW.ORG. He also liked to talk about scientific subjects like string theory or complicated math equations, or just tell jokes and have a fun time. If he had a twinkle in his eye and a smirk on his face, you knew his sense of humor was about to show itself. In any case, it was commonly mentioned how much of an encouragement he was to his dear friends who had stopped by to encourage him.

A resident of the Assisted Breathing Center (Metro Health Hospital in Grand Rapids, Michigan) since 2008, Alvia developed friendships with many of the staff members. Whether it was providing daily care, playing games, or just talking, everyone at the center genuinely cared for him. They always noted his polite demeanor and thankful attitude, which made him a beloved part of their life. Alvia’s family would like to express great thanks and appreciation for those that had a share in caring for him. There was never a worry that he wasn’t receiving the best possible care, and this brought much peace of mind over the years.

Due to the Covid-19 pandemic, no memorial service will be held.

Please feel free to share a note, a story, or your favorite memory of Alvia.