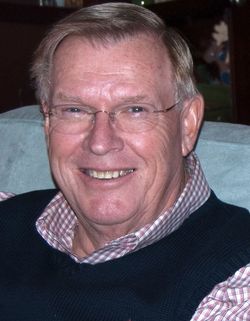 Arlan Rae VanKoevering, died peacefully Thursday, September 21, 2017 in Grand Rapids, MI at the age of 79. Arlan is preceded in death by his beloved wife Louann VanKoevering and brother Bob VanKoevering. Surviving are his children David VanKoevering (wife Regina) of Essex, VT, Mike VanKoevering (wife Sue) of South Burlington, VT and Kristine Lang (husband Greg Lang) of Grand Rapids, MI.  He was blessed with 7 grandchildren, Ben, Kari, Mark, Brian Jr., Ja, Annierae and Melat and two great-grandchildren Yingwang and Yinglong. Arlan graduated from Creston High School in 1956 and went on to receive his undergraduate in Aeronautical Engineering from the GMI Institute and his Master’s degree in Control Theory from MIT. He worked as the Senior VP of Engineering, Marketing and Contracts/Programs at Lear Seigler, Inc. in Grand Rapids, MI.  In 1981 he moved to Vermont and was the President at Simmonds Precision Aircraft Systems Division for 10 years. He finished out his career as President of Eldec Crane Corporation in Seattle, WA and retired to South Burlington, VT in 2001. In 2015 he moved back to his hometown of Grand Rapids, MI with his wife and has spent the last two years at Clark Retirement Community in the memory care unit. Aside from his amazing career, Arlan was known as an avid fly fisherman and loved the great outdoors, enjoying hunting, golfing, skiing and traveling the world. He was a loving father that enjoyed sharing his outdoor passions and travels with his children and grandchildren. His overall greatest achievement was the love he shared with his wife Louann, their commitment and love for each other was inspiring and it brings peace to his family knowing they are reunited again. Visitation for Arlan will take place Wednesday, September 27, 6-8:00 p.m. at O’Brien-Eggebeen-Gerst Chapel, 3980 Cascade Rd. S.E., Grand Rapids, and one hour prior to the service Thursday at the church. Funeral service will be held Thursday, September 28, 11:00 a.m. at Trinity Lutheran Church, 2700 Fulton St., Grand Rapids, MI. Pastor Robert Linstrom officiating. In lieu of flowers the family asked that donations be made to the Alzheimer’s Association, Greater Michigan Chapter, 25200 Telegraph Rd., Ste 100, Southfield, MI  48033-7443.