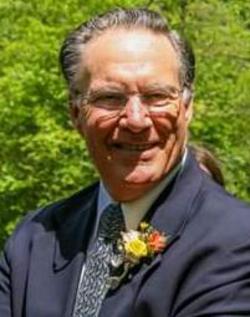 Kelly, as most people called him, was a son, a father, a friend and a brother. He lived, worked, cared for others, loved, was kind, got angry and happy, he felt proud and hurt. He was a real man.

He started life as a poor child, one of seventeen Kidder children who survived to adulthood. He was smart and ambitious. In the seventh grade, he met Rosie Wellman. She was his love all his life. Together, they went to high school, college, married and created a family of their own – Kimberly and Brian. After the tragic death of Jay and Pat Kidder, his brother and sister-in-law, Kelly and Rosie enlarged their family to include the children of Jay and Pat – Michael, Robin, Vicky and Jeff. Always practical and logical, Kelly and Rosie sold their little house on Ogimas Rd. in Hastings and moved North to a big house on a lake near Lowell, Michigan.

There they raised all those children and loved each one as much as they possibly could. It was Kelly’s job to be Dad. He did it and it was hard on him. Kidder kids have never been an easy crop to grow. He did it with reason, logic, kindness and toughness. He was able to hold the reigns tightly enough to allow them to settle on their own life paths, and loosely enough to not make them complete rebels. This was no easy task. He did it with love and caring.

Kelly also served the public school children as a Speech Pathologist and as a Director of Special Education in the Grand Rapids Public Schools. His career spanned forty years of service during which he taught many people to be better teachers and therapists and, by that extension of knowledge and skill served the needs of many thousands of children.

His presence in the flesh will be missed, but the ripples of action from his life – his presence in our hearts, minds and lives will live on through his children, their children and all the children he helped in the public schools, for many generations.

Just like his own father, Kelly was the Dad Kidder of his generation.  There is no higher title of respect in the Kidder Family.