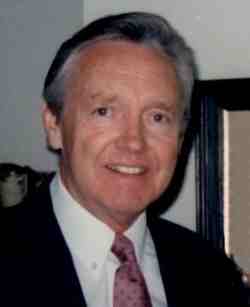 Calvin Frederick Welmers   August 23, 1925-November 30, 2015 Cal was born on August 23, 1925, in Grand Rapids, to Frederick and Angeline (Dyksterhouse) Welmers. A lifelong resident of Grand Rapids, he graduated from South High School in 1943. Immediately upon graduation, Cal enlisted in the U.S. Marine Corps and served in the Pacific Theater, including the battle for Iwo Jima, and later with the occupational forces in Japan. After serving his country, Cal enrolled at Michigan State University, but found that he had a gift for resourcing a scarce commodity, cars, and selling them to friends. This began his career in the automobile business, and Cal spent 45 years selling luxury used cars at Cal Welmers Used Cars on 28th and Division Avenue.  Cal met the love of his life, Louise M. VandenBerg, on a blind date after the war, and they were married for 38 years until Louise’s death in 1986.  In his retirement years, Cal developed his love of tennis and golf, playing both of them well into his 80’s decade. Cal was predeceased by his parents and wife, Louise Welmers. He is survived by his four children and spouses, Paula (Fred Mulhauser) Welmers, Sandra (Jeff) Clark, Terre (Curt) Johnston, and Todd (Paula) Welmers; 7 grandchildren, Coe (Kyle Chase) Lacy, Jordan Lacy, Bryan Clark, Anne Clark, Sam Johnston, Claire Johnston, and Joe Welmers; a sister, Donna (Richard) Caster; and many cousins, nieces and nephews. The family will host a “celebration of life” for Cal on Friday, December 4, 2015, from 1:00 p.m. to 3:00 p.m., at Heather Hills Retirement Village, 1055 Forest Hill Ave SE, Grand Rapids. In lieu of flowers, the family suggests a contribution in Cal’s name to the Veteran’s organization of choice.