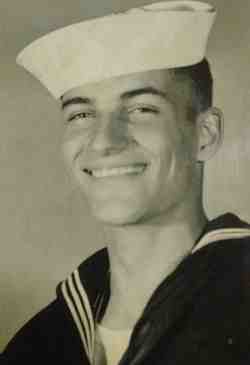 Clarence Richard Jones (AKA: “Dick” Jones), age 77, passed to his eternal home on Sunday, October 11, 2015 at the Grand Rapids Home for Veterans in Grand Rapids Michigan, where he had lived since 1986.
He was preceded in death by his father, Robert Powell Jones, Sr., his mother, Virginia Maxine Laberdie, his brother, Robert Powell Jones, Jr., his step­father, Edwin Paul Laberdie and his step­mother, Virginia “Ginny” Jones.
Dick grew up in the Jackson and Napoleon, MI areas. He attended Napoleon High School, leaving in the 11th grade his high school education to enlist in the United States Navy, where he completedand specialized inelectronics and Sonar Underwater Detection Systems. He was stationed on two aircraft carriers: The U.S.S. Enterprise and The U.S.S. Saratoga.He was honorably discharged after serving nine (9) years, nine(9) months and seven (7) days of active Navy duty. Dick spent much of his life working in the electronics field, where he easily excelled. He will long be remembered by family as a loving and kindly artistic man with an extraordinary mind, keen sense of humor, quick wit, and ready smile. He loved music and was an adept harmonica player, which he picked up during many long sea voyages. He was an avid whistler and could whistle many tunes that will be long-remembered.
A talented artist, Dick would spend many hours with his siblings drawing cartoon characters and playing his many harmonicas to their delight and amusement. He was a grand story teller, who loved to write short stories and poetry. He was a master at shooting pool, and was well known in those circles as a “Shark!” Watching him clear a table was nothing short of art in motion. It can well be said that Dick leaves behind a beloved daughter, Deborah Renee Jones and son, Casey Jones. Survived by brothers: John Jones, Thomas Jones. Sisters: Patricia M. Laberdie, Susan (Thomas) Firth, Mary (Frank) Jones-Donovan, Kathleen (John) Jones-Merkel, Linda (Wayne) Jones-Shepard, and Sister-In-Law Marguerite L. Jones.
Dick is also survived by Nephews: Robert Powell Jones, III (Brenda), Robert C. Shroads II (Destiny) and Niece: Melissa Ann Jones (Fiancé Brian Bell), as well as many great­nephews, great­nieces, numerousfriends and caregivers at the Grand Rapids Home for Veterans.Funeral services will be on Monday, October 19, 2015 at 2:00 p.m., at the Grand Rapids Home for Veterans, 3000 Monroe Ave., NE, Grand Rapids, Michigan 49505. There will be a funeral with Military Honors at the Fort Custer National Cemetery, 15501 Dickman Road, in Augusta, MI 49012 (12 miles east of Kalamazoo) on Friday, October 23, 2015 at 1:00 p.m. A Memorial Service will be arranged at a later date at St. Paul’s Episcopal Church, 309 S. Jackson St.,in Jackson, Michigan.
In lieu of flowers, monetary gifts can be made to the Grand Rapids Home for Veterans, Hospice and/or the Wounded Warrior Project at http://wwp.org.