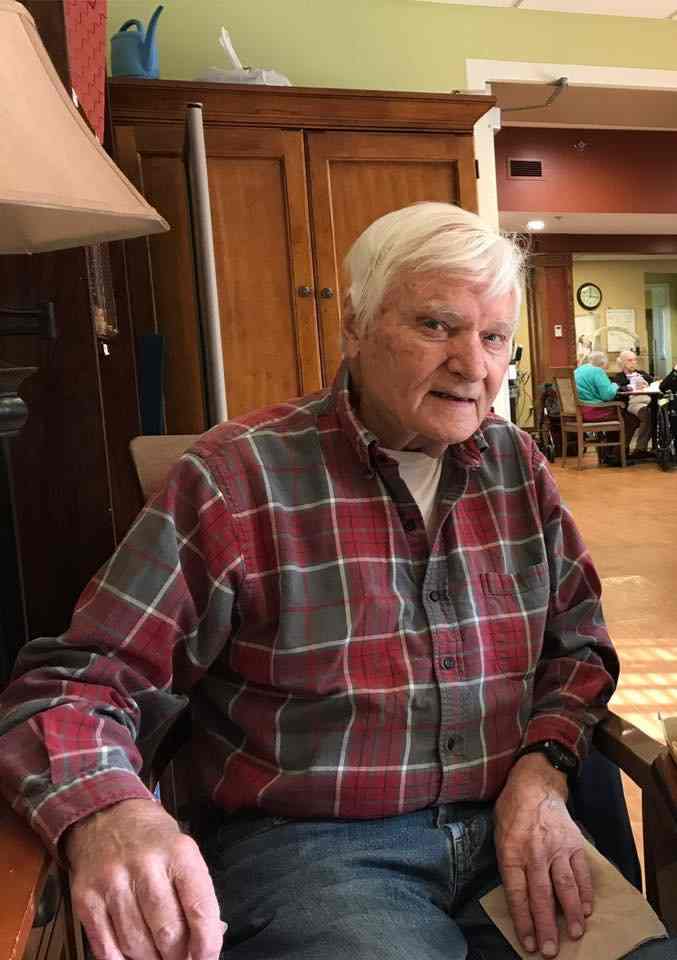 Con  Moelling, age 87  died August 10, 2019 at his beloved home and river in Middleville, Michigan. He is survived by his wife Jo Ann (Flack) and his four children, eight grandchildren, and four great-grandchildren – David Moelling (son)and Natalie Vasa,  Leah (granddaughter); Jill (daughter) and Jeff Dean, Adam (grandson) and Meghan Dean, great grandchildren Charles and Grace;  and Rebecca (granddaughter) and Andrew Preston, great grandchildren Samuel and Tessa; Jan (daughter)  and Jon Diaz, granddaughters Justine and Carolyn;  Jennifer (daughter) and Greg Metz, grandchildren Enzo, Estelle, and Sabine.  Con was born to Mary Ellen Fitzgerald and Cornelius Moelling Sr. in St. Louis, Missouri at the end of the Depression. He is preceded in death by his fraternal twin brother Peter, brother John, and sister Mary Patricia. The family ran a corner store in St. Louis. “The babies” were the youngest of the family and took a larger role in the family grocery store after their grandfather died and they were put in charge of deliveries for the store.  After graduating Beaumont High School in 1950, Con attended St. Louis University and married Jo Ann in 1953. He enlisted in the Navy that same year and served for three years as a Lieutenant Junior Grade on destroyers in the Pacific.  After the Navy, Con and Jo Ann returned to St. Louis to be near family and friends and start a family.  Con attended Washington University for his law degree. He graduated and passed the bar, but never practiced. He told family he realized the law wasn’t for him, but he wanted to finish and prove he could pass.  He embarked on a commercial real estate career in St. Louis, Chicago, and later Grand Rapids, Michigan.   Con’s career in commercial real estate wasn’t inspiring for him and he was a person who needed to be passionate about something. He found his true fit in his work life when he began by volunteering and then later working for In the Image, a non-profit that provided free goods to those in need,  for the remainder of his working years. He thrived and adored the work, the people, and getting to know people of other backgrounds, races, and abilities. He found he was a good grant writer and problem solver for the organization. He truly appreciated his coworkers and the people they served.  He began the S.H.O.E.S. program at In the Image which provided new school shoes for children and today the program is expanded and continues to serve many children in need.   After retiring from In the Image, Con and Jo Ann enjoyed their beautiful, rustic home on the Thornapple River. They joyfully helped care for three of their youngest grandchildren and later great grandchildren.  They enjoyed getting to know their wonderful Middleville neighbors who looked out for them and became like family. Their dogs and cats they had over the years were always family – especially dear big Shadow – the gentle, giant, black lab, being the last dog and Con’s “boon companion” to the end.   We will remember his intelligence, risk-taking, inventiveness, charm, worry, humor, messiness, love of animals and children, amateur guitar playing, creative spirit, rebellious thinking, and opinions. He loved his family, friends, nature, and animals. He had his flaws like everyone, but those were far outshone by his unconditional love and curious, enthusiastic nature which made him seem far younger than he was. He enjoyed life and appreciated simple moments, often saying (after a glass or two of wine), “what a glorious night!” to all who could hear. We could write pages and pages of the memories we have of him and what he meant to our family. He will be dearly missed by many. Rest in Peace Con/Dad/Grandpa/Grandpa Gigi/Uncle/Friend – we will always love you and hold your memory dear.   Thank you to his wonderful long-time friends, caring Middleville neighbors, and special thanks to his recent caregiver, Harlene Dreisenga, whose loving care and friendship allowed him to stay independent in his home.  The family will hold a memorial for Con at his home at a later date.  In lieu of flowers, donations made in Con’s name to the non-profit, In the Image, of Grand Rapids, Michigan, an organization important to Con,  would be welcome.