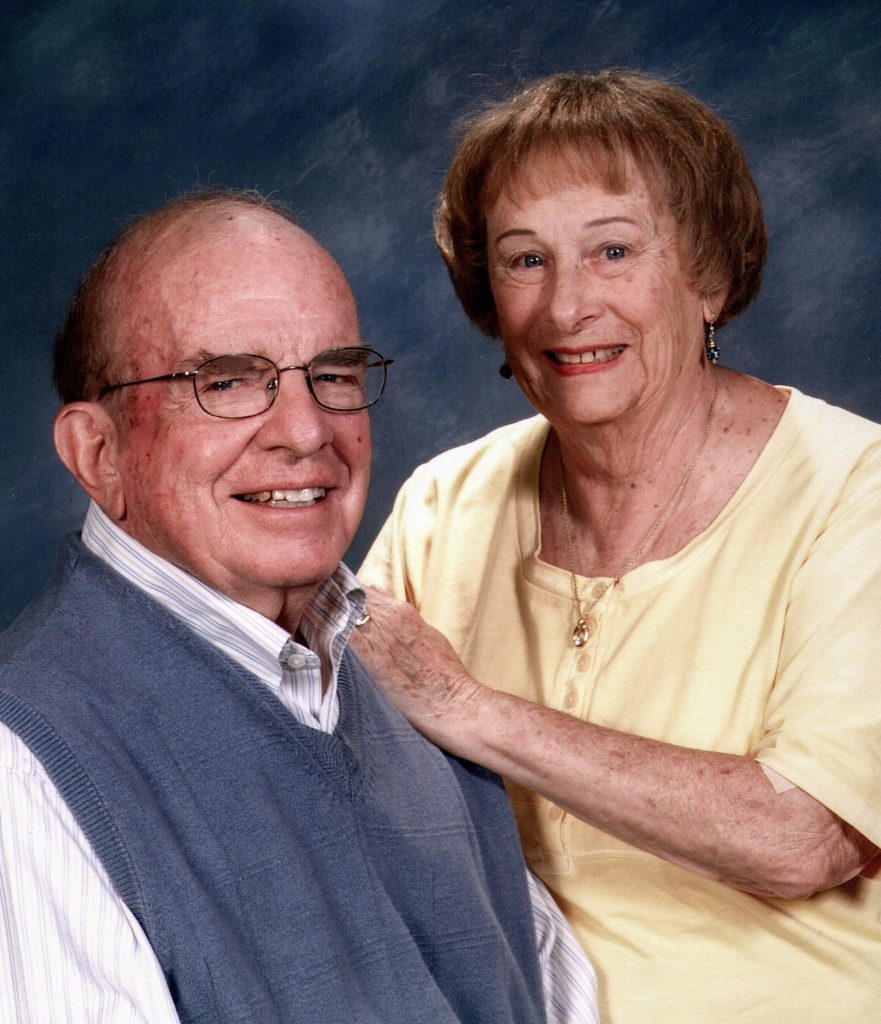 Dennis E. Winn, DDS, age 85, went to be with his Lord on Monday November 9, 2020. He was born on January 30, 1935 in Grand Rapids, Michigan to Melchior R. and Rosalie T. (Topolski) Winn. He was joined by his loving wife Carolyn L. (Wing) Winn, age 85, who passed away peacefully on Thursday November 12, 2020. She was born on August 30, 1935 in Grand Rapids, Michigan to Harold E. and Eleanor M. (Roat) Wing. They are preceded in death by their daughters Deborah E. Winn and Marirose A. (Winn) Six; his sister Joanne M. (Winn) Conlin; her brother Harold G. Wing and sister Elaine R. (Wing) Ide. They are survived by their sons Dennis E. (Ann) Winn II, Scott R. (Deb) Winn and Paul J. (Amy) Winn; their grandchildren Mary (Bethany), Jessica (Michael), Stephen (Lindsay), Amanda (Steven), Kristin (Ryan), Erica, Jamie (Cotie) and Sophie and their special great-grandchildren, nieces and nephews. Carolyn is also survived by her brother William F. and sister-in-law Carolyn J. (Miller) Wing. Dennis graduated from Catholic Central High School in 1953 while Carolyn graduated from Ottawa Hills High School the same year. They grew up on different sides of the Grand River yet managed to find each other and fall in love. They were married in Saint Mary’s Catholic Church on August 24, 1957, while Dennis was attending the University of Michigan School of Dentistry. He was a member of the Psi Omega Dental Fraternity. By the time he graduated in 1959, they had already welcomed their first child into their growing family. It was in Ann Arbor, Michigan that they met many of their nearest and dearest lifelong friends. He became a Reserve Commissioned Officer in the Army of the United States in 1958, rising from the grade of Second Lieutenant to Captain prior to his Honorable Discharge in 1964. During that time, he obtained his Certificate in Orthodontics from the University of Pennsylvania School of Dental Medicine in 1962. Carolyn was working and tending to their young family which had grown to five. They returned back to Grand Rapids where Dennis began his practice of orthodontics. He loved his work and touched many lives creating beautiful smiles and instilling self-confidence throughout his lengthy career. They were faithful servants of the Catholic Church and lifelong members of Immaculate Heart of Mary Parish. Carolyn spent many years arranging flowers and decorating the Church for all occasions. She loved crafting, flower arranging, bird watching and gardening. She was actively involved with the Women’s Dental Auxiliary and selflessly devoted herself to many ministries and worthwhile causes including fundraising for the Multiple Sclerosis Foundation. Dennis served on numerous councils and committees. He was active in many ministries at IHM Parish where he particularly enjoyed being a lector. They were founding members of the Children’s Healing Center in Grand Rapids. On the fun side, Dennis especially enjoyed golfing in the IHM Men’s Golf League, tennis and skiing.  Carolyn enjoyed the simple things in life that provided moments of pure joy, such as eating ice cream and playing cribbage. They both loved tailgating in Ann Arbor and attending Michigan football games in the Big House; Go Blue! Their greatest joy was their family. Dennis was involved in Boy Scouts, Indian Guides and coaching many of his children’s sports teams. They started a family tradition in 1965 when they spent their first week at the University of Michigan Alumni Association’s Camp Michigania, a family camp on the beautiful shores of Walloon Lake. The “Michigania Magic” continues to this day. They cherished all the time they could get at their cottage on Pentwater Lake, spending time on the water, enjoying the company of family and friends and spectacular sunsets. They loved traveling, sharing experiences and making memories in their 63 years of marriage.  Private Mass of Christian Burial will be celebrated at Immaculate Heart of Mary Church, Rev. Troy Nevins, presiding.  The service will be livestreamed starting at 11 AM EST, on Monday, November 30, 2020, on the O’Brien-Gerst Funeral Home Facebook page. Interment Rosedale Memorial Park.  A public Celebration of Life will be held at a later date. The family would like to extend their gratitude to the wonderful people at Spectrum Health Hospice for their comforting, compassionate care. In lieu of flowers, the family invites you to consider a memorial donation to support several community health programs by sending a gift to Children’s Healing Center, 1530 Fulton Street East, Grand Rapids, MI 49503 which provides essential recreation, education and social interaction to children with weak immune systems; or to Winning Smiles Orthodontics Foundation, 1179 East Paris Ave SE, Suite 220, Grand Rapids, MI 49546 www.winningsmilesortho.com which provides essential orthodontic services to low-income, underserved children and young adults throughout West Michigan.