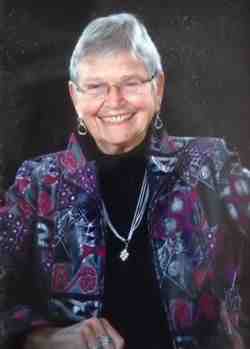 Dolores (Dode) June Collins passed into the loving arms of the Lord March 17 after a brief battle with cancer. Dode was preceded in death by her father, Clarence Dollaway, her mother, June Covey, and her beloved husband, Rex. Dode was born August 4, 1929 and began studying music at age five, beginning with the Hawaiian steel guitar and the clarinet. At age eleven she was the youngest member of the Lowell High School Band, first chair which she held through her high school years. At age twelve, her family formed a dance band called “Swing and Sway with the Dollaways”, with her mother on the piano, father on drums, and Dode on the clarinet and saxophone. They played two nights a week through her high school years.

Dode was the Lowell township clerk in the 60s, maintaining the office in her home, and running all the elections for the township. She was also in charge of the Oakwood Cemetery. With a move, she needed to give up the township position. She started driving a school bus for Lowell Schools in 1966 and after three years was promoted to Transportation Supervisor, recruiting and training drivers, planning routes, and giving road tests for the state of Michigan.

In 1990, she retired and the two of them started going to Florida for three months in the winter. They had wonderful times travelling the US in their motorhome. Florida was very special time for them; considering her Florida friends her second family. They made many wonderful friends and had great times. Rex passed away in 2003 and she continued driving to Florida, pulling her car behind, until she was diagnosed with macular degeneration.  She still went to Florida with daughter Tina driving her down and son Steve driving her home. She enjoyed her Lakeland, Florida winters for twenty-six years.

Dode had a tremendous love for music and at age eight-six years she was still dancing, organizing the Mardi Gras parade in the Lakeland park, never letting her poor eyesight slow her down. She was also an avid quilter, making a quilt for each child and grandchild.

An opportunity to meet with the family is Monday, March 21 at 1:00 p.m. in the Fellowship Hall of Lowell First United Methodist Church, 621 E. Main St. A memorial service will follow at 2:00 p.m. in the sanctuary. In lieu of flowers, donations may be made to Gilda’s Club, 314 S Hudson St, Lowell, MI 49331.

“God saw you getting tired and a cure was not to be, so He put his arms around you and whispered, “Come to Me.” With tearful eyes we watched you, and saw you pass away, and though we loved you dearly, we could not make you stay. A golden heart stopped beating, hard-working hands at rest.  God broke our hearts to prove to us, He only takes the best.”