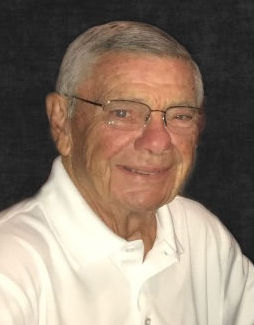 William John (“Bill”) Roth, M.D., a resident of Grand Rapids, Michigan and formerly of Lowell, Michigan, Alma, Michigan, and Green Valley, Arizona, passed peacefully surrounded by his loving wife and family on December 11, 2021.  He was 87. Through Bill’s long life, he endured the passing of many family members, most notably that of his first wife and mother of his three children Marion Elizabeth (Wieland) Roth, sister Edith (Roth) Czapek and more recently, his mother-in-law Betty Nye Rasmussen. He is survived by his wife of almost twenty-five years Bonnie (Nye) Roth, daughter Pam (Marty) Buschle, their children Kristina (Derek) Parker, Anna (Chris) Blair, and Billy Buschle, daughter Gina Roth, son Mike (Betty) Roth, their children Michael Jr., Emily, and Caroline Roth, Bonnie’s daughters Nicole (Patrick) Sandro and Kristie Hollingsworth, her children Megan and Macy Hollingsworth and their father, Jim Hollingsworth, sister-in-law Sandra (John) Perkins, and his lifelong friend whom he loved as a brother, Dennie Howe. The son of John F. and H. Marie (Perry) Roth, Bill was born in Grand Rapids and raised in Lowell. He excelled academically and athletically, finishing high school as class valedictorian while garnering twelve varsity letters.  He graduated from the University of Michigan Medical School in 1959 and completed his medical residency at Butterworth Hospital in obstetrics and gynecology. His medical practice brought him to Alma, the community he adored, adopted as his own and proudly served for over thirty years.  The first OB/GYN to serve Gratiot Community Hospital, he delivered approximately ten thousand babies until his retirement in the early 1990’s.  After retirement, he split time between Grand Rapids and Green Valley, always sure to maximize his time golfing and attending Michigan football games. Bill loved sports. Watching his grandchildren compete athletically brought him great joy. He unconditionally supported his family.  A man of few words, those he uttered were of consequence.  When asked, he would offer clear advice lovingly and efficiently.  He was generous, compassionate, loyal and respected.  He had an unwavering moral compass; the Golden Rule guided his words and deeds.  His was a life well-lived. A celebration of his life will be scheduled at a future date. In lieu of flowers, memorial contributions can be directed to the University of Michigan Health System MidMichigan Health–Gratiot at https://midmichigan.thankyou4caring.org/donation-page-gratiot .