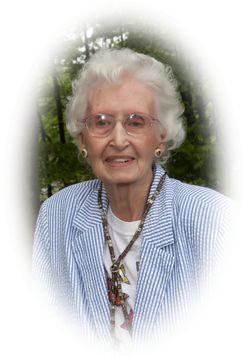 Betty (Elizabeth Barbara Burrow) Heaston (age 94), born August 29th, 1920 to Anna (Havlik) and Robert Henry Burrow in Beloit, WI, passed away Tuesday, August 25th at her home in Lowell, MI. Betty and her husband Gaylord (now deceased) moved from Beloit to Lowell, MI in 2000 to be closer to family.

Betty attended Beloit Memorial High School and graduated in 1938. She then went on to attend Rockford Business College, graduating in 1939. This earned her a job at Beloit Iron Works. Betty married Gaylord Heaston on May 29th, 1941. While Gaylord was fighting in WWII, Betty held down the home front with twin boys until he returned.

Betty truly enjoyed her family. Much time was spent camping and traveling. She and her husband had visited 47 of the 50 United States. She was a loving wife, an amazing mother, a wonderful grandmother, and a loving great-grandmother.

In addition, Betty was very involved in her community. She once said, “I am proud to be called a native Beloiter who has always put home and family first, but has still found time to serve her community.” She belonged to numerous clubs and served on many committees in her home town, such as the Junior Women’s Club, the Federation of Women’s Club, the Ways and Means, Welfare, Constitution, and Beautification committees. She started the first club paper as the Intermediate Club secretary, and served as a picture lady for the Wonderful World of Art program. She was an active member of St. Paul’s Episcopal Church, serving on numerous boards and committees, as well as teaching Sunday school for 14 years. She was also a Cub Scout Den Mother, Brownie and Girls Scout leader and worked with the YMCA and YWCA. She participated in PTA at her children’s schools for 16 years.

Betty is survived by her two children, Diana Bittrick of Lowell, MI and Dean and Nancy Heaston of Indian River, MI. She is also survived by five grandchildren, Brien and Amy Heaston of Canton, MI, Brenda (Bittrick) and Doug Wunder of Grand Haven, MI, Monica Heaston and Ryan Ingalls of Menasha, WI, Brett and Amanda Bittrick of Holland, MI, and Brandon Bittrick of Norton Shores, MI. Betty is also survived by great grandchildren Dylan and Sophia Wunder, Denon, Jai, Coulter, and Iva Ingalls, and Landon, Pace, and Ava Bittrick. Betty was preceded in death by her parents, her son Dale (1959), and her husband Gaylord (2014).

There will be a visitation from 6-8 on Friday, August 28th at Roth-Gerst Funeral Home, 305 N. Hudson, Lowell, MI. Betty’s funeral will be on Saturday, August 29th at the First United Methodist Church of Lowell, 621 E. Main St. at 11 am. There will be a luncheon at the church following the funeral. In lieu of flowers, please consider donations to the First United Methodist Church of Lowell.