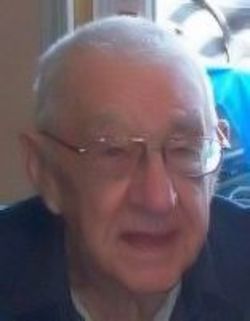 Ernest Earl Vosburg, age 89, passed away Monday, March 30th at Spectrum Health, due to complications from his COPD. His daughters were there with him at his passing. Ernest was born July 15th, 1925 on his family farm in Ada, Michigan, Cascade Township, to Herman Earl Vosburg and Nola (nee) Richmond Vosburg. Ernest lived his 89 years on his family farm and attended public school until the 8th grade.

He was an avid reader and continued to educate himself on all matters concerning farming and including all matters in the investment world. He was known to say, “He had too many irons in the fire,” but all those irons kept him afloat from one venture to the next, his favorite being farming. His wife Alma, once told him, “Some of the things we did worked and some of them didn’t”. He also bought and sold farm equipment and parts, ran a junk yard, sold seed corn, put in cash crops and owned and operated the Vosburg Block and Gravel Company, where many of the local homes have his blocks in their construction. He also raised hogs from the late 1960’s to mid-1970’s, finally getting out of it when he couldn’t make any money at it.

Ernest Earl Vosburg PFC, was drafted into the army on his 18th birthday, July 15th, 1943. He did 13 weeks of his basic training at Fort Knox and went 18 miles south of Fort Knox to Cedar Creek Gunnery Range, training as a Sherman Tank mechanic. He also instructed fellow troops in electrical. After his stay at Fort Knox, he shipped out on a train for San Luis Obispo, California for a short layover, then shipped out on a train again to Fort Lawton, Washington state. After receiving orders to do to Hawaii, he boarded the ship ‘Oriole’, a World War I navy transport ship that had five hammocks high in the transport compartments. A Destroyer escorted them. In transit to Hawaii, a Japanese submarine was spotted and the US Destroyer escort dropped depth charges. Arriving safely in Hawaii, he was stationed at Scofield Base. While in Hawaii, Ernest welded flamethrowers onto Sherman tanks.

After the war, Ernest focused on raising 4 children with his wife, Alma. They always had a garden. Alma would can, Ernest would literally put meat on the table, and life was good, albeit busy, making ends meet. Their house was always the place where everyone in the neighborhood gravitated, including extended family. Ernest and Alma were a unique team and supported friends, family and all people in general that they came into contact with by their loving way, their generosity and their caring nature.