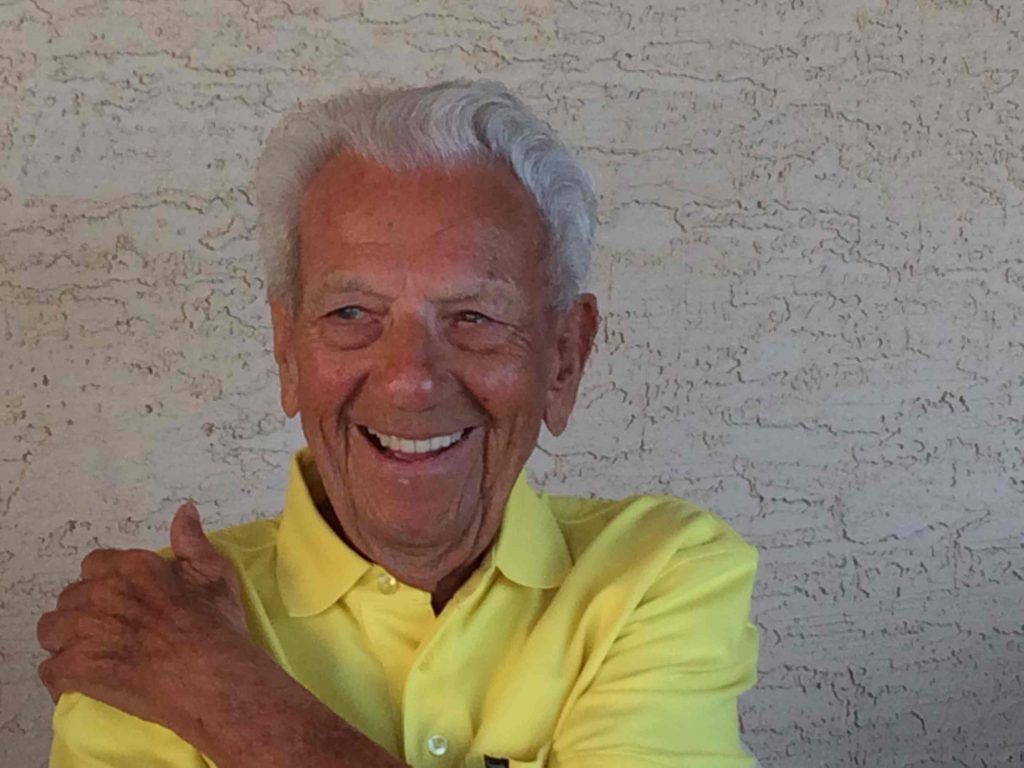 Eugene Joseph Cappo, 94, passed away the morning of May 8, 2019 in Grand Rapids, Michigan.   Gene was very gregarious, had an exuberant personality and was a friend to everyone.  Gene was born to immigrant Italian parents, Caesar and Jenny Cappo, in a rural copper mining community in Michigan’s upper peninsula.  Gene’s mother was a homemaker whose primary focus was her family, showing love through keeping the family warm on bitter winter nights, and cooking delicious Italian food with fresh garden vegetables and tasty menus.  His father spent 51 years working a mile below ground in the Painsdale Michigan area copper mines.  Gene made that downward trip just once and vowed to choose a different occupation.  Gene was the youngest in a family of five children including an older sister Anne and three brothers, Joe, Louis and Caesar, all now deceased.  The Cappo family was proud of their immigration to Michigan’s upper peninsula, determined to speak the English language as skillfully as natives.  With a closely knit, loving family, they enjoyed Noni’s homemade spaghetti, ravioli, crusty bread and pasties, and in the summer, Nono’s home grown vegetables.  Everyone helped to make the yearly batch of Italian wine when the California grapes arrived.  Gene excelled in outdoor sports and became the high school hockey star.  World War II whisked him away at seventeen to serve three solid years in the Navy as a first class watertender on the USS Mississippi battle ship.   When the war ended, Gene applied for enrollment in General Motors Institute, located in Flint Michigan, where he earned a degree in automobile fundamentals and dealership management.  During this time, he resided and earned cash by bartending for his sister Anne at her husband’s Fenton Hotel.  He relaxed, bought new clothes and a shiny new yellow Buick convertible.  He and his new car became a happy-go-lucky team complete with his saucy sailor hat.  However, change happened fast!  Gene drove to Pontiac Michigan one fall day to visit his cousin/teacher Eleanor Sloan.  He met her 22-year-old roommate, Carolyn, also a teacher, fell in love, and by January they were married.   After Gene’s graduation and the birth of their first baby in 1952, he was hired by General Motors Truck and Coach to teach the fundamentals of the new Hydra-Matic transmission, traveling all over the western parts of the country.  Gene and Carolyn bought their first home in Hayward California.  Gene’s love for the automobile industry continued for many years.   Over time, Gene worked for several companies and dealerships, including Buick and Chevrolet, and lived in California, Colorado, Indiana, and Illinois until settling down with his family in Michigan. In retirement, Gene enjoyed the winter months in Arizona for many years.  He loved the warm weather, playing golf and making new friends.  His eyesight faded significantly after 80, but he managed his disability with ease.  Although his Arizona days were over in his 90’s, Gene still found pleasure in listening to books on tape, trivia games, and friendly conversations.  His memory was excellent.   When he was 93, he chartered a fishing boat on Lake Michigan and while his fishing partners agonized with seasickness, he was healthy and able to land a 36-inch, 16-pound trout for dinner.  Most important over all his experiences, Gene participated in a beautiful rosary prayer service with his wife, just hours before his death. Gene remembered all the prayers of the Rosary, recited them aloud, and was well prepared to meet his Savior. Carolyn is presently Gene’s survivor and their marriage lasted almost 70 years.   Gene was extremely proud of his six surviving children including Mark Donovan Cappo (Marilyn) of Crestwood Kentucky, Amy Ruth Abbott (John) of Grand Rapids Michigan, Jeffrey Eugene Cappo of Carmel California, Louis Anton Cappo (Susan) of Walnut Creek California, Jonathan Wheeler Cappo (Emily) of Mamaroneck New York, and Eugene Wheeler Cappo (Marcy) of Huron Ohio.  Gene had 20 grandchildren; Nathan (Tonya) Cappo, Joel Cappo, Jonathan Cappo, Cathy (Derek) Townsend, Jordan Cappo, Mary Beth (Mike) Brown, Angela (Ross) Keilen, Mark (Gena) Abbott, Michael Abbott, Eric Cappo, Michael (Lianne) Cappo, Aly Cappo, Amy Cappo, Kyle Cappo, Casey Cappo, Daniel Cappo, Jason Cappo, Matthew Cappo, Ryan Cappo, and Joshua Cappo, and 11 great grandchildren; Grant and Grady Cappo, Abigail Cappo, Matthew, Jack and Grace Brown, Michael, Evelyn and Adam Keilen, and Mary Grace and William Abbott.  Funeral Services will be held on May 31, 2019 at Immaculate Heart of Mary Church at 1935 Plymouth Avenue, Grand Rapids Michigan 49506.  Visitation will begin at 10:00 a.m. and the funeral mass at 11:00 a.m., with lunch to follow.   For 20 years Gene suffered blindness from macular degeneration.  Memorial donations can be made to Bright Focus Foundation for curing macular degeneration, at 22512 Gateway Center Drive, Clarksburg, MD 20871.