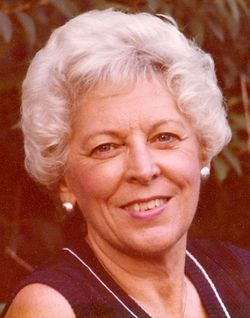 Evelyn Booth Crawford died on Saturday, May 21, 2016, at Clark Retirement Community in Grand Rapids. She was 100. Evelyn was born Evelyn Lucille Booth on April 9, 1916, in Grand Rapids, the oldest daughter of Neva and Don S. Booth. She was preceded in death by her husband of 50 years, Thomas J. Crawford; her only sibling, sister Lorraine Marian Carpenter; and her niece, Donna Hunt. Husband Tom Crawford was her complete partner and love-mate in a life that she often reflected upon happily.  She believed herself to be richly blessed throughout her years and she never tired of thanking God for it.  She married Tom, then a U.S. Army infantry soldier, in 1945 shortly after his return from World War II service in France and Germany. They had met in Grand Rapids before the war. Their married years were centered mostly in the Detroit area, where Tom became director of railroad transportation for General Motors Corp. In retirement, they lived in Spring Lake and in Longwood, Florida,  among many friends with whom they gathered around bridge and dinner tables and golf tees. When Tom died of heart disease in 1995, Evelyn returned to Grand Rapids to live in the Lakewood Hills Apartments on Reeds Lake. She plunged into a late-life career as an antique salesperson and dealer, first at Theodora’s on Wealthy Street in East Grand Rapids and then at the Heirloom House on Lakeside Drive, from which she retired at the age of 94. She extensively researched the Crawford and Booth families’ genealogical histories, traveled to Ireland, Hawaii, Florida and Arizona with friends and family, and she indulged her devotion to Notre Dame football and Michigan State basketball.  Evelyn loved to spend time with her extended family and to serve wonderful kitchen creations, especially desserts. She played bridge, shopped estate sales and hosted parties, particularly those that coincided with election nights and the Kentucky Derby. She embraced the Roman Catholic faith early in her adulthood, joined Tom in teaching it to her children and remained faithful all of her life. Evelyn is survived by her daughter Margaret M. (Robert K.) of Mundelein, Illinois;  son Joseph P. (Martha A.) of East Grand Rapids; six grandchildren, 10 great-grandchildren;  six Crawford nieces and nephews; one cousin, Jeannine Millen of Ashland, Ohio; Jeannine’s daughter, Cynthia Millen Roberts of Maumee, Ohio;  and niece Donna Hunt’s three children: Pamela, Scott and Tracey.

The family will meet with visitors from 5 to 8 p.m. on Tuesday, May 24 at the O’Brien-Eggebeen-Gerst Chapel, 3980 Cascade Rd SE, Grand Rapids. A Scripture service will be at 7 p.m. A Mass of Christian Burial for Evelyn will be at10:30 a.m. on Wednesday, May 25 at St. Thomas the Apostle Church, 1449 Wilcox Park Drive SE, Grand Rapids. Rev. James Chelich and Rev. Rock Badgerow co-celebrants. Interment Woodlawn Cemetery.