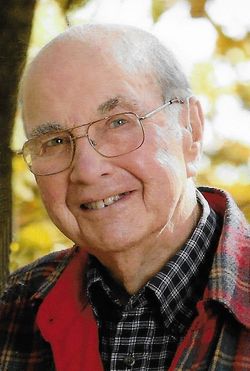 Floyd Chase died June 6, 2017 at the age of 99.  Floyd was born on April 8, 1918 to Charles and Rose (Savage) Chase on a farm in Richmond, Michigan.  He grew up on the farm until the death of his mother, followed by his father, after which he lived on a dairy farm and then with a family in the town of Richmond until he finished high school.  After graduation, he moved to Detroit to work, and was drafted into the army during World War II.  He served in an anti-aircraft unit in the Pacific, following the war from Hawaii to Saipan and Iwo Jima.  After the war, he returned to Detroit where he pursued a career as a skilled machinist making airplane parts.  In 1979 he moved to Lowell, where he started upholstering as a hobby; and was immediately busy upholstering furniture for friends and then friends of friends, making it a full time hobby.  In Lowell he was happy to once again live in the country.  He loved the wildlife and watching the birds.  He spent many happy hours on his tractor working the garden, plowing the driveway, and cutting firewood in the woods.  He became the proud owner of a 1911 Model T, and drove it around the countryside, as well as on tours with a group of old car buffs called the Brass and Gas.  Floyd had a life filled with adventure and things he loved.  He was always happy sitting by a fire and drinking a glass of wine with friends.  He would become thoroughly engrossed in opera.  He loved good food, and shared many meals with friends and a gourmet club that stayed together for 25 years.  But most of all, Floyd was a kind man that touched everyone’s heart.  He taught us how to be a good friend.

On June 6, Floyd left us for heaven where he will join his parents; his sister, Ruth (Howard) Truitt; and his brothers, Ernie (Ruth), Ralph, and twin brother, Lloyd (Jennie); as well as friends that are waiting there for him.  He leaves behind Dr. Kathleen Chase, his loving wife of 44 years; a daughter, Cynthia (Terry) Johnson from his first marriage to Phyllis Muir; a large family of nieces and nephews; and many friends who will miss him greatly, but are comforted in knowing that he is in a wonderful new place.

Floyd, who was always humble, requested no fanfare or services, and left us quietly and peacefully.  However, there will a celebration of friends for a wonderful man who shared so much happiness with all of us. A Memorial Service will be held at 11:00 a.m. Friday, July 14, at Porter Hills Village Meeting House/Chapel, 3600 E. Fulton St. Grand Rapids, MI 49546.  Memorial contributions may be directed to Porter Hills Foundation, 4450 Cascade Rd. SE, Ste. 200, Grand Rapids, MI 49502-4646.