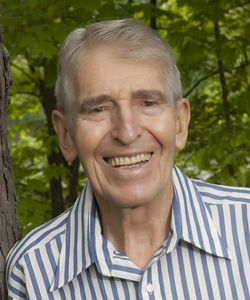 Gaylord Heaston passed away peacefully Monday, July 28, 2014 at Green Acres in Lowell, as he slept next to his wife, Betty (Elizabeth Burrow) of 73 years. Gaylord was born in Huntington, IN on August 12, 1919 to Raymond and Nellie (Warpup) Heaston. He attended Huntington High School (class of 1937), and Indiana Institute of Technology in Ft. Wayne, IN graduating with a Mechanical Engineering degree in 1939. He was employed as Chief Engineer at Gardner Machine Company in Beloit for 50 years, and was a member of ASME for over 60 years. Gaylord served in the Navy during WWII aboard the Blue Ridge in the South Pacific. His brothers Rex & Alvin also served in WWII. Gaylord and Betty made their home in Beloit, WI before moving to Lowell 15 years ago. They have always enjoyed traveling (usually camping) covering all 50 states, and canoeing (most of the rivers in WI). Gaylord was a loving husband, an amazing father, an exceptional grandfather, and an inspirational great grandfather. He enjoyed “projects” and games, especially croquet, with his family.