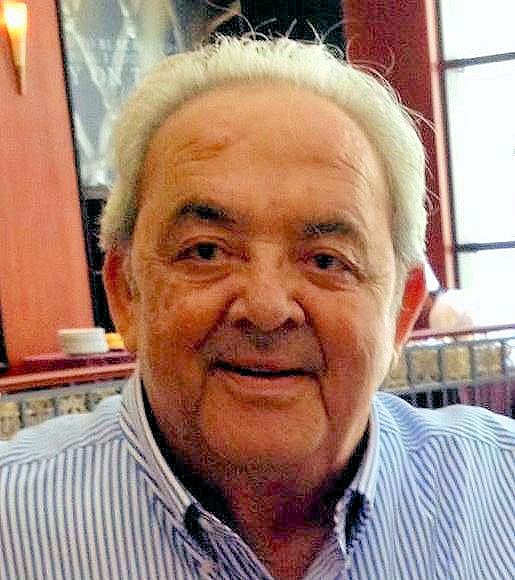 George Andrew Agon, age 91, of Grand Rapids, passed away at home with his family at his side on Thursday, March 14, 2019. George was preceded in death by his sisters, Sophia Koutouzos and Katie.  He is survived by his wife of 58 years, Patricia; children, Andy (Donna) Agon, Angelo Agon, Chuck (Mary) Agon and Chris Agon; sisters-in-law, Helen Manalokos, Mary (John) Petridis; brothers-in-law, Bill Grafos and Nick Grafos; grandchildren, Alexandra, George, Nikos, Erika and Brianna; nieces, Athena, Stella, Gigi and Gina; nephews, John, Andy, Keith, Dennis, Michael and James; and many friends. George was born in 1928 in Achladokampos, Greece, “The Land of Pears.” In his early life, George helped his father run the family supply store that provided necessities for local merchants and farmers. On the heels of WW2 that reached his village, he served as a Morse Code operator in the Greek Navy. Following his service of five years, he boarded a ship bound for America and located his relatives in Lansing, Michigan where his life began anew. Soon he would meet his lovely bride, Patricia, and settle in Grand Rapids where he raised his four sons. One of the greatest achievements of his life was his efforts to bring his sister, Sofie, and Patricia’s sister, Helen, and brothers, Bill and Nick, to America. He was a true pioneer who loved his family more than anything. His passion became Agon’s Family Restaurant, still in operation nearly 60 years later. Here he served his customers delicious food and for hundreds of people, made lifelong friendships. George was a huge baseball fan and lucky for him all his sons played on teams that he loved to watch. He relished great conversations and never met a stranger…if you met George, he was your friend. He was a proud, intelligent and generous man and enjoyed life. He lived it fully and succeeded greatly in what mattered most to him, his family and faith, friendships and Love.  You will always be remembered and missed. Funeral services will take place at Holy Trinity Greek Orthodox Church, 330 Lakeside Drive NE, Grand Rapids. Visitation on Sunday, March 17 from 6-8 PM with Trisagion Prayers read at 7 PM. Monday, March 18 visitation at 10 AM with funeral services beginning at 11 AM. Rev. Fr. James Berends officiating. The family would appreciate memorial contributions to Holy Trinity Greek Orthodox Church.