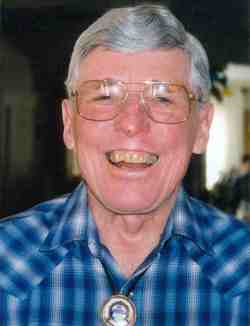 George William “Bill” Sefton took his final jump Sunday, December 6, 2015 and left this world at age 93. A World War II paratrooper, he jumped into Normandy on D-Day, into Holland for Operation Market Garden and fought in the bloody Battle of the Bulge in Bastogne. He met his life partner, Elizabeth Margaret (Beth) Huie, an army nurse on active duty in Mourmelon, France. Separated by war after their initial nine day romance, they wrote hundreds of letters to each other and were ready to marry when they returned home from their service to their country. Post WWII Bill rose to the rank of Colonel as he continued to serve in the Army Reserve for over 25 years. Bill and Beth raised a family of ten children and welcomed into “Seftonville,” many, many others needing a place to belong for a while or for the rest of their lives. There was always room at the table, a place to sleep, counsel to be had and, (if you stuck around long enough), they would put you to work. Bill was a self-made man. He worked his way up through the world of advertising to create his own very successful agency “Sefton Associates,” by investing vast amounts of his own money, talent, time and enthusiasm. He was a maverick and a man who was an interesting balance of both pragmatism and optimism. He embraced responsibility. His Bloody Marys and omelets are legendary. When he was at home, “relaxing,” you would often find him with a drink in his hand, a crossword puzzle on his lap, a book by his side and a TV show in the background while being surrounded by the comforting chaos of Seftonville. He had a passion for reading, golfing, hunting and nature and he had a passion for life. He was a man of deep faith, a member of St Thomas the Apostle Church and was very active in his faith community. He always said, “You can’t outgive the Lord.” To his grandchildren he was, “Grandsire.” He set the bar high and led by example soldiering on in the face of any and all adversity. He authored the book “It was My War (I’ll Remember It the Way I Want To!)” leaving a tangible legacy for his descendants and a fascinating account of his war experience. He is preceded in death by his father and mother Pete and Kathleen Sefton, his sister Mary Kay Hirt, his brother Tom Sefton, and his beloved wife. He leaves behind his sister Sue Kelsey (Gene), his children: Mary Beth Sefton (Tom Edmonds), Michael Sefton (Betty), Amy Sefton (James Killus), Susie Sefton (Frank Burns), Laurie Sefton, Henry Erb, Becky Sefton (Hubert Kraemer), Bill Sefton (Sharon), Sarah Simon (Ed), David Sefton (Crystal), Kathy Miller (Alex), 25 grandchildren and 23 great grandchildren…and counting, plus many others who call him Grandsire. He leaves many precious nieces, nephews and  friends from his community and from the 501 Parachute Infantry Association. Mass of Christian Burial will be celebrated Saturday 10:30 a.m. at St. Thomas the Apostle Parish, 1449 Wilcox Park Dr. S.E., Grand Rapids. Rev. James Chelich presiding. Visitation Friday 2-4:00 p.m. and 6-8:00 p.m. with the Rosary recited at 7:30 p.m. at O’Brien-Eggebeen-Gerst Chapel, 3980 Cascade Rd. S.E., Grand Rapids. Memorial contributions may be made in his honor to St. Thomas the Apostle Parish School, roof fund.