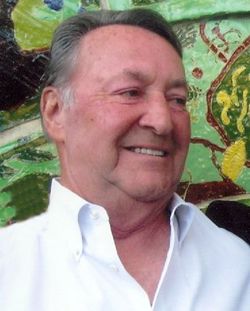 Gerald Duane Frederick, age 75, of Grand Rapids passed away on April 4, 2016 at his home in Grand Rapids, surrounded by his loving family.  Jerry is survived by his beloved wife of 52 years, Bonnie Kay Frederick, son Dan Duane Frederick & Michelle Brandt Frederick of Grand Rapids, daughter Tamra Frederick Marshall & Dr. Robert Erskine Marshall of San Francisco and eight grandchildren: Cody Frederick, Taylor Frederick, Rachel Frederick, John Playford, Mykal Brandt, Mykala Supplice, Robert Frederick (Robbie) Marshall, and Ian Marshall. Gerald was born in Pierson, Michigan on May 28, 1940, the youngest son of Erma (Esch) and George Frederick. He had six siblings: Elner, Virginia, Stella, Junior Warren, Stanley, and Eldon.  Jerry lost his father at a young age yet was lucky to gain a step father, Dan McCarthy. He grew up in Twin Lake, near Muskegon. He met his love, Bonnie McMaster, in Ada, Michigan and they were married on December 28, 1963.  Gerald was a proud Army veteran having served during the Vietnam War.  After the service, Jerry was a skilled forklift driver at Steelcase for 31 years. Jerry was a devoted family man. While raising their children, Jerry and Bonnie spent most weekends visiting family, camping at School Section Lake or snowmobiling at the family cabin.  He was a favorite among many nieces and nephews. He looked forward to deer hunting season to spend time with his brothers at their cabin in Bitely.  Jerry and Bonnie were fortunate to enjoy a twenty year retirement together at a summer place in Six Lakes, Michigan and as snowbirds at their winter home at Horseshoe Cove in Bradenton, Florida where they made many good friends and he enjoyed playing golf, horseshoes, and attending all the social events. They enjoyed travel to Hawaii, Alaska, Mexico and many trips to California. Jerry was passionate for old cowboy movies, and taking good care of his cars. Relatives and friends may visit the family on Saturday, April 9, 2016 from 2:00-5:00 pm at O’Brien-Eggebeen Gerst Chapel, 3980 Cascade Rd. S.E., Grand Rapids.  A graveside memorial service with honor guard salute will take place at Ada Cemetery on a later date to be announced.  Memorial contributions may be made to Jerry’s favorite charities, Wounded Warrior Project or The Shriners.