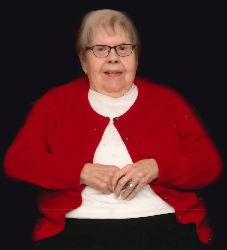 Ilene R. DeWolf, age 98, of Lowell, peacefully went to her heavenly home on July 19, 2021. She was preceded in death by her husbands, Carl Wood and John Otis DeWolf; brother, Richard (Ozzie) Onan; and her parents, Sam and Helen Onan. Ilene is survived by her sister-in-law, Ida Onan; nieces and nephews, Philip Onan, Kathy (Richard) Comunale, Rosemary (Duwayne) Dougherty, and Paul (Ann) Onan; special family members, Mike (Georgia) Smith, Chris (MaryLou) Smith, Paula (Jim) Fillmore, and Becky (Steve) Hubbert; and many cousins and friends. Ilene was a lifelong resident of Lowell. She and John spent many winters in Florida after her retirement from Old Kent Bank, where she was known as ‘Woody’ by her co-workers. Ilene took great pride in her flower gardens and had the ability to grow the most beautiful African Violets. Ilene, first and foremost, loved the Lord. She also loved children, animals, singing, and was a beautiful vocalist. A special thank you to Legacies Assisted Living Staff for their kind and loving care for Ilene. Visitation will be Saturday, July 24, 2021, 2-3PM at the Lowell Church of the Nazarene, 201 N. Washington, Lowell, Michigan 49331. The Funeral Service will be at 3PM at the Lowell Church of the Nazarene. James Carey, Thom Houseman, and Rev. Trevor Workman will be officiating. Interment is at Oakwood Cemetery. Memorial contributions can be directed towards Kindred Hospice, 625 Kenmoor Ave., SE, Suite #115, Grand Rapids Charter Township, MI 49546, or to your favorite charity of one’s choice.