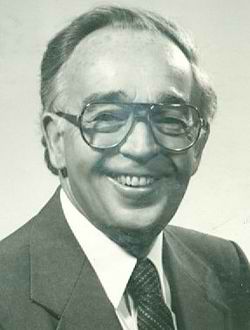 James B. McKee, age 95 of Grand Rapids, born June 8, 1919 in Detroit, Michigan, died Monday, February 9, 2015. Jim was preceded in death by his beloved wife of 61 years Alice McKee (in 2003) and his three sisters, June, Lucille, and Betty. Surviving are his brother, Kenneth (Lee) McKee of Fraser, MI; sons, Bruce McKee of Knoxville, TN, Douglas (Karen) McKee of Grand Rapids, MI, Ronald McKee of East Lansing, MI; grandchildren, Megan Cornish, Katherine McKee, Michael McKee, Kelly McKee and Nicole McKee, and many nieces and nephews. Jim lived a long and exceptionally full life that included a childhood in depression-era Detroit, service in the U.S. Army in the European theater in World War II, post-secondary education at Wayne State University (B.A. and M.S. degrees) and University of Wisconsin-Madison (Ph.D. in Sociology, 1949) and a distinguished career as Professor of Sociology at Oberlin College (1950-1955), University of Toledo (1955-1959), and Michigan State University (MSU, 1959-1985) and Emeritus Professor of Sociology at MSU (1985-2015). Among the many highlights of Jim’s scholarly career are his textbook “Sociology: “The Study of Society”, three editions of which introduced sociology to countless students during the 1970’s and 1980’s, and his book “Sociology and the Race Problem: The Failure of a Perspective” for which he received the 1955 Distinguished Publication Award from the American Sociological Association. Jim was also a talented public speaker, a dedicated and popular teacher and a much-sought-after thesis advisor. His many teaching contributions were recognized with the university and profession in many ways, most notably as chair of the Department of Sociology and Anthropology at University of Toledo in the 1950’s, as co-founder of the public policy-oriented James Madison residential college at MSU in the 1960’s, as a longtime member of the MSU Faculty Senate where he served as a forceful advocate for faculty and student issues, and as President of the North Central Sociological Association. In addition to his scholarly interest, Jim was also a lifelong fan of the Detroit Tigers baseball team and MSU Spartans football team. Jim was a devoted husband and father and a dedicated scholar and teacher, and will be sorely missed by his family, friends, colleagues and former students. A Memorial service will be held at a later date.