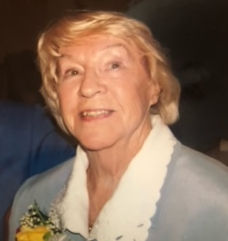 Jeannette Smit, age 98 of Caledonia, MI, went to be with her Lord and Savior on Tuesday, May 10, where she has reunited with her husband of 74 years, Henry Smit, and her son, Michael. She will be lovingly missed by her son Ron (Vicky) Smit, her daughter Sylvia (Pete) Huitsing, her grandchildren Heather (Daryl) Kooiker, Heidi (Glenn) Boone, and Kellie (Robert) Roblin, and her great-grandchildren Payton and Taryn Kooiker, Cicily, Brianna, and Ethan Boone, and Talia Roblin.

When Jeannette and Henry left their home in Amsterdam after WWII, they faced a future of unknowns which held more promise than their homeland, given the struggles they had experienced during and after the War. They had to leave behind their family, friends, culture, and land that had so generously raised them up. With their son Ron, they settled in Grand Rapids, Michigan and grew their family and American identity.

In photos and letters, Jeannette carefully preserved each milestone in their family life, and as years passed she took pleasure and comfort in looking over the beauty of her family and how life in them shined even after great trials. The retelling and sharing over photo albums led to thanking God for His enduring faithfulness and presence in their lives.

Jeannette loved serving her family, especially providing them a stable and comforting home that was always open to them readily, along with a warm meal, a cup of tea, and a cookie. She carried her family’s concerns with her, and she and Henry would pray daily for their children’s present challenges and that they would grow in their love for God. Always in their prayers, they thanked God for His provision and forgiveness. These prayers Jeannette prayed daily until she left for heaven, and they always began and ended with giving thanks, even during the toughest times.

On the wall near the dining table hangs Jeannette’s beautifully hand-stitched image of the home she and Henry built together which captures their life of prayer. The stitched inscription reads: “For mine house will be called a house of prayer.” Isiah 56:7