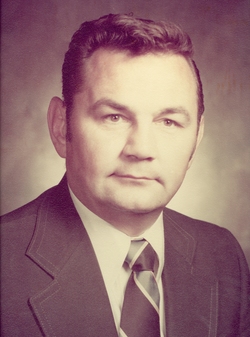 “Jack” Lane passed from this life on April 21, 2016 at his home. Born John Fuller Lane in Grand Rapids to George R. Lane and Mildred [De Bree] Lane, he was a three sport “All City” athlete at Creston High School, where he made accomplished, life-long friends and from which he graduated in 1949. Jack enlisted in the U.S. Coast Guard during the period of the “Korean Conflict” and served in Maine, Sault Ste. Marie, and Grand Haven. His service with the “Coasties” re-enforced his love of the lakes and respect for the natural world. Jack Lane married Norma Ann Troeger on November 8, 1952 at St. Mary’s Church in GR. They have five children and lived a “charmed life” of work; time with family, relatives and friends; service; and travel, including all 50 states. As his family frequently noted, Dad was an explorer who always seemed to find obscure, quiet, beautiful spots at the end of dirt roads! Jack Lane earned an undergraduate degree in education from Western Michigan University and a masters in educational administration from Michigan State University. Throughout his life, Jack instilled a deep sense of history, character, and integrity. He was an avid scholar of the American Civil War, inspired by the letters of his great-uncle, a casualty in the war. Copies of these letters, believed to have been transcribed by his great-grandmother about 1867, were donated to Western Michigan University’s Waldo Library and have inspired further extensive study of “The Glorious Old Third [Michigan Infantry]”. Jack volunteered for and was a member of veterans’ organizations. In addition, Jack became a “loon ranger” to document the “common loon” on the Sauble Lakes. He enjoyed family pets and birding as well. Jack spent many years as a teacher, coach, counselor, and assistant principal at Ottawa Hills and Central High Schools in Grand Rapids. He helped establish Forest Hills Northern High School and was its first principal. An award is given annually in his name which reflects his devotion to young people and education. Instrumental in bringing international exchange students into schools, Jack said, “When this school is finally torn down, it will have donated to the world young men and women who have learned to love all peoples of the world.” Jack was preceded in death by his parents and his son-in-law Dirk Koning. He is survived by his wife Norma; brother Tad; daughters, sons, and their spouses Mary Lane and Amar [Ourchane], Virginia [Lane] Koning, Jack and Denise [Davidson], Tom Lane, Linda Lane and Charles Devries; grandchildren Shaun Koning; Tarik Ourchane; Kelly Koning-Ramic and Azur Ramic; Adam Ourchane; Anna Lane; Jillian Lane; Nadia Ourchane; Meredith Lane; Clayton Devries; Colby Devries; and greatdaughter Zoey Doner-Koning; many dear friends and relatives with whom he shared his life’s journey. A visitation memorial at which the family will receive visitors will be held at the O’Brien-Eggebeen-Gerst Chapel, 3980 Cascade Rd. S.E., Grand Rapids on May 1, 5-8:00 pm. A visitation and Mass of Christian Burial will be held at St. Robert of Newminster Church, 6477 Ada Dr., Ada on May 2, at 10 and 11:00 am. In lieu of flowers, the family asks that donations be made to support the “Jack Lane Husky Award” at FH Northern High School (3801 E Leonard, GR 49525).