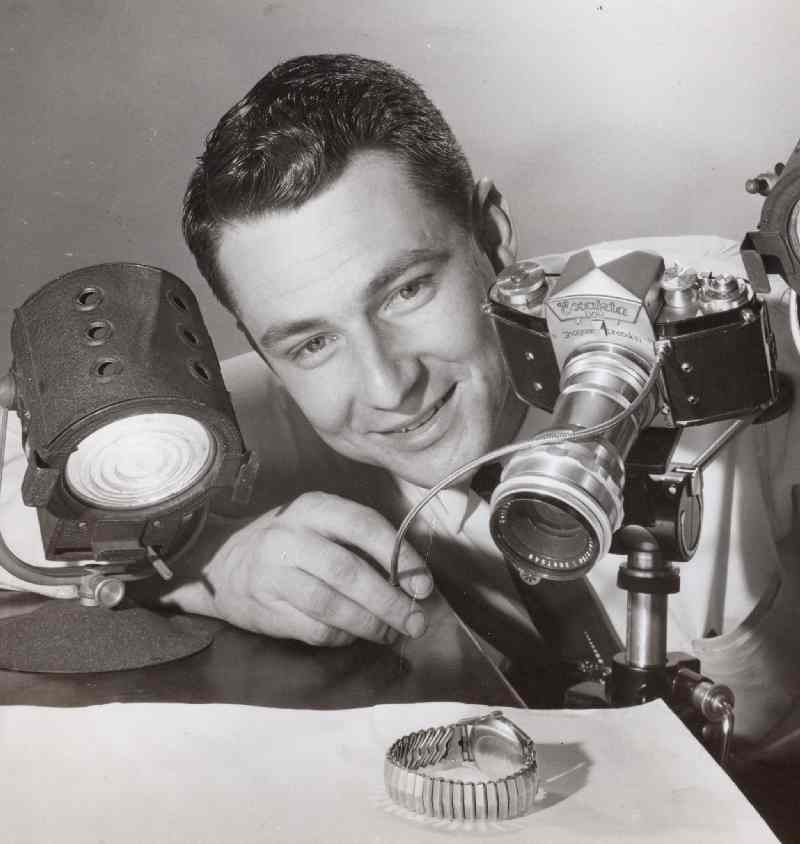 Photographer John R. Milhaupt, age 90, candidly chose to join his wife in Heaven on Saturday, November 30. Any regrets? “Negative. Not on your tintype”, he’d reply. Such a thought would make him shutter. How could he gloss over such a picture-perfect opportunity?

John was born in Norwalk, OH and raised in Grand Rapids, MI.  He developed his love of photography during grade school, and while in high school was a darkroom technician, and later a photographer for Robinson Studio.

After serving in the Army’s 62nd Engineering Topographic Company in Korea, he returned home to fire off numerous shots for Robinson Studio and the Grand Rapids Herald. While working for WOOD TV, he even captured an escaped fugitive – then was reprimanded for not doing so on film.

John knew he was on a roll. By flashing his smile he schussed into a relationship with Peg, who was resting her broken leg in a Nub’s Knob ski lounge.  He simply couldn’t wait to meter. They instantly clicked. Little time lapsed prior to their marriage in 1964. Together they lovingly raised four clever little snapshots.

He over-exposed his family to his love for trains, and it stuck with his two oldest sons.  He was an active member of the West Michigan Railway Historical Society where he served as newsletter editor for more than twenty years. An avid craftsman, he passed those skills to his children, and after retirement, volunteered as a carpenter with Habitat for Humanity and as a cabinetmaker with Grand Rapids Home Repair Service.

Upon losing his wife of 55 years, John was heartbroken. He couldn’t bear three weeks in a dark room.  So he opened the door and stepped into the light.   Now, just picture it, they wear matching halos. What a spectacular image!

A Mass of Christian Burial will be offered at St. Paul the Apostle Church, 2750 Burton St. SE, Grand Rapids, on Friday, December 6 at 11AM, Rev. Peter Damian Presiding.  Family will greet friends and relatives on Thursday, December 5 from 4-7 PM at O’Brien Eggebeen Gerst Chapel, 3980 Cascade Road SE, Grand Rapids and Friday one hour piror to the service at Church.

In lieu of flowers, memorial contributions may be made to the Thomas Milhaupt Scholarship at Grand Rapids Community College Foundation, 143 Bostwick Ave NE, Grand Rapids, 49503.