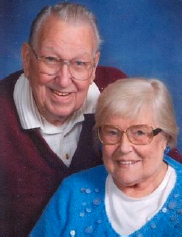 Joseph Carlson, age 91 of Caledonia, went to be with his Lord and Savior, Jesus Christ, on Saturday, February 10, 2018.

He was born on April 27, 1926 to Joseph Oscar Carlson and Mary Green in Grand Rapids, MI.

He was preceded in death by his father, mother, wife Mary E. (Garvin), his wife of 69 years, brother Robert and sister Elin.

He proudly served his country in the U.S. Navy aboard the liberty ship U.S.S. Sculptor during WWII (1944-5) in the South Pacific.

He was owner of Joe Carlson Well Drilling, Inc. for many years.