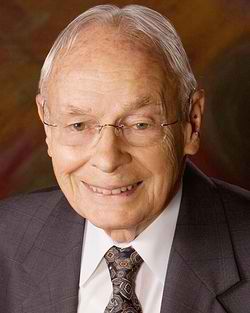 Kenneth B. Maatman, age 94 years, loving husband and father, died Wednesday, February 11, 2015, surrounded by his family. He is survived by his loving wife of 66 years, Velma (Kling) Maatman; children, Karen (Dr. Lee) Strohl, Dr. Thomas (Jill) Maatman, Laura Huizenga; grandchildren, Katherine Strohl, Sarah (Patrick) O’Donnell, John (Amanda) Maatman, Dr. Benjamin (Lesley) Maatman, Dr. Thomas K. Maatman, David Huizenga; great-grandchildren, Madeline O’Donnell, Nora O’Donnell, Anthony Maatman; sisters-in-law, Jane Maatman, Evelyn Maatman; and many nieces and nephews. Ken was predeceased by his parents, Bernard and Abbie Maatman, and brothers, Donald Maatman and Norman Maatman. Born in Grand Rapids, Michigan, on April 24, 1920, Ken graduated from Central High School in 1938 and attended Grand Rapids Junior College. The day after Pearl Harbor was bombed December 7, 1941, Ken enlisted in the United States Army. After Officer‘s Candidate School, he trained in Basic Flight, Aircraft Warning, Wire Communications, Land Mine Disarmament, Cryptography, Guerilla Warfare and other specialties. He commanded the 191st Signal Company in the China-Burma-India Theatre of War. He received several awards during the war including the Bronze Star, Asiatic-Pacific Campaign, China War Memorial, and Combat Service. After the war he was awarded several medals including Army Good Conduct, American Campaign, World War II Victory, Combat Service, Asiatic Pacific Victory, Overseas Service, US Army Commemorative and Officer Reserve. His military career shaped leadership skills that served him throughout his civilian life. After his honorable discharge, he served in the Officer Reserve Corp until 1954. Ken returned to Grand Rapids in 1948 and married the love of his life, Velma. He joined Webber Advertising Agency and later, he joined Rapids-Standard Company, which became known as Rapistan Dematic, and held the position of Marketing Manager. He is a past President, past Director, and past Program Chairman of the Ad Club, member and past officer of the Industrial Improvement Association, a member of the Exhibitors Advisory Group of the American Management Association, and a member of the American Marketing Association, West Michigan. He is a former chairman of the Public Relations Committee of the Greater Grand Rapids Chamber of Commerce. He has served as Publicity Chairman of the United Fund Campaign, and was March of Dimes publicity chairman. In 1967 he was awarded the AdMan of the Year Silver Medal by vote of the American Advertising Federation. Of special note, Maatman set up programs for Rapistan that have Gained national attention, including an inquiry processing system used now as a model for industrial Marketers, a national trade mark program, and award-winning advertising campaigns. Upon retirement from Rapistan Dematic in 1985 he founded his own new company, Marketing Communications, Inc. specializing in point-of-purchase advertising. This company expanded to cover the entire United States, and is now known as SightLine. He was actively involved in the Grand Rapids community and donated his advertising skills to fund-raising for community organizations. He served as deacon in the former Bethany Reformed Church. His hobbies were landscape gardening and photography. Many of his photos have been gifted to Libraries, hospitals, offices and homes where they are on display to this day. Velma would like to thank the staff at Heather Hills Retirement Village for their kind and loving care of Ken. The family also would like thank Gentiva Hospice for their supportive care. Funeral service will be held Saturday 11:00 am at O’Brien-Eggebeen-Gerst Chapel, 3980 Cascade Rd. S.E., Grand Rapids. Interment Graceland Memorial Park. Visitation Friday, 2-4:00 pm and 6-8:00 pm., and one hour prior to the service at the funeral home chapel.