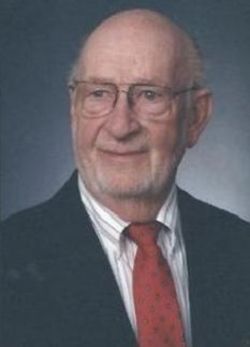 Lewis J. Crame, age 95, of Cascade, MI died peacefully at his home on July 29, 2017. He was born in Grand Rapids on September 1, 1921 to Hazel Tift Crame and Lewis Walter Crame who have predeceased him. He attended Dickinson Elementary School and was a member of the South High School class of 1941. His family moved to Morley, MI in 1940 and he graduated from Big Rapids High School in 1941. Following graduation, he enlisted in the US Navy and proudly served aboard the carrier USS Cowpens in the South Pacific until his discharge in 1946. Upon his return, he worked at Ranger Reel for 3 years, leaving there in 1949 and joining Lear, Inc. where he remained until his retirement in 1984, 35 years later. Lew enjoyed bowling and tennis, but he really loved his golf. He also treasured his life on the Thornapple River, visiting the neighbors on his golf cart, and maintaining his lawn on his John Deere. He enjoyed cruising on the river and ringing a bell as he passed friends. He and his wife Pat loved traveling both in this country as well as internationally and they spent several winters in Spain and Mexico, however, it was Ireland that kept calling them back. Lew was a member of St. Robert of Newminster Catholic Church and the St. Robert golf league. He also volunteered at the church. He is survived by his beloved wife, life partner and best friend, Patricia; his children and step-children: Ron Crame of Gowen, Mary VanOeveren of Rockford, Ric & Cheryl Crame of Troy, Randy Mellinger of Florida, Timothy & Kelley DeBoer of Cascade, Patricia and Michael Moll of Caledonia, Thomas DeBoer & Karen Kremers DeBoer of Rockford, and Denise & Mark Pray of Cascade. He is also survived by his beloved grandchildren: Nick & Jen Hanline, and Beth Hanline, Katie & Zachary VanOeveren DeYoung, Michael VanOeveren oflllinois, Amy Lauretti of Texas, Jacob Mellinger & Autumn Malmquist- Mellinger of Otsego, Brianna & Scott Boley of Kalamazoo, Jamie Christiansen of California, KayLee and Tim DeBoer, Whitney and Wesley Blood, and Stacie Moll, Christa & David Schwarz and Emily Pray; eight great-grandchildren; and, wonderful friends, neighbors and extended special “family” at the Gathering Place in Cascade. He was predeceased by daughter Terri Mellinger, his parents and his brother and sister-in-law, Don & Edna Crame, his daughter-in-law Ruth Crame, and his precious little furry companion Lucy. Visitation will be Monday 4-7:00 p.m. at O’Brien-Eggebeen-Gerst Chapel, 3980 Cascade Rd. S.E., Grand Rapids and one hour prior to the service at the church. Mass of Christian Burial will be celebrated Tuesday 11:00 a.m. at St. Robert of Newminster, 6477 Ada Dr., Ada. Rev. Leonard Sudlik presiding. Interment Cascade Cemetery. In lieu of flowers memorials may be made to Mid-Michigan Honor Flight, P.O. Box 385, Mecosta, MI 49332.