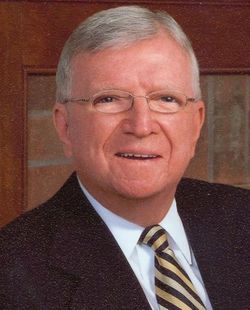 Lyle Bernard Morrison, passed from this earth on Sunday, November 13, 2016 at the age of 88. He was preceded in death by his wife, Mary Lou; son-in-law, Scott; sisters, Mary Morrison and Isabel Dandrow. He is survived by his children, Christine Hock, Susan (Joseph) VanderVeen, Molly (Thomas) Carpenter and Patricia (Russel) Kunze; grandchildren, Heather (Marcel) Thibert, Nicholas and Hillary Hock, Katherine, Michael and Madelyn VanderVeen, Thomas and Timothy Carpenter, Kelsey (Kevin) Maher, Christopher, Jason and Laura Kunze; great-grandchildren, Bryson, Braydon, Braelyn, Aurora, Maliyah, and Preston; special friend, Madelyn Askins; many nieces and nephews. The family would like to thank the staff at Breton Woods Rehabilitation Center of Holland Home and the Gauthier Family Home Care especially Larry and Chi Chi. Lyle was a successful life insurance salesman and a member of the Million Dollar Round Table. Faith, family and friends were most important to him. Lyle loved life and there was not a place he went that he did not find a friend. He touched many lives through his generosity and love of people. He was active on many boards including, GRCC, Aquinas College, the Killgoar Foundation, Catholic Secondary Schools and most recently an avid supporter of OLLI, the Lifelong Learner Institue at Aquinas College. Visitation will be Thursday from 2-4 and 6-8 PM at the O’Brien-Eggebeen-Gerst Chapel, 3980 Cascade Rd. SE with a vigil service at 7:30 PM. The family will also meet with relatives and friends one hour prior to the service Friday at church. Mass of Christian Burial will be offered Friday 11:00 AM at Immaculate Heart of Mary Church, 1935 Plymouth, SE, Rev. Troy Nevins, presiding. Interment Woodlawn Cemetery. Memorial contributions may be made to the Killgoar Foundation for IHM School, 1935 Plymouth SE, Grand Rapids, MI 49506, the Foundation for Catholic Secondary Education of Greater Grand Rapids, 360 Division Ave. S,, Grand Rapids, MI 49503-4539, or Aquinas College, 1607 Robinson Road SE, Grand Rapids, MI 49506-1799.