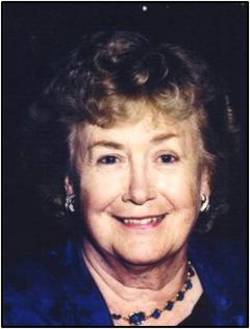 Margaret Elizabeth McMorris (“Betty”) Baxter of Grand Rapids, Michigan passed away peacefully at home in the company of her children on December 20, 2015.  Her grace and dedication to those she loved continue to inspire everyone who knew her, especially those who remember how she stayed at her husband’s hospital bedside at the Mayo Clinic for over a year until he was able to come home with her.  She is greatly missed.

Betty was born in Sault Ste. Marie, Ontario, Canada to Harry McMorris and Cora Ellen Rowe McMorris.   She graduated from Sault High School in Sault Ste. Marie, Michigan, and was awarded her Registered Nursing degree from Michael Reese Hospital School of Nursing in Chicago.  She was proud to have served in the U.S. Cadet Nurse Corps, the largest women’s service corps and the first integrated uniformed U.S. service corps, during World War II.  Betty later worked in Emergency Medicine as well as Labor and Delivery at Butterworth Hospital in Grand Rapids, Michigan.  She also volunteered at the Evangeline Booth Hospital and Home for Unwed Mothers, providing pre-natal and infant care and support for mothers and children.

She enjoyed tennis, golf, socializing with family and friends, and traveling the world with her husband of 53 years, Richard B. (“Dick”) Baxter and the International Academy of Trial Lawyers, a high point of which was meeting Pope John Paul II.  She served as a docent at the Gerald R. Ford Museum, did volunteer work for UNICEF, and was a member and officer of the Grand Rapids Bar Auxiliary and Michigan Lawyers’ Auxiliary.  She was a member of the Women’s City Club for many years and was a 42-year member of Cascade Hills Country Club, where she spent many happy hours on the golf course. Most of all, she enjoyed activities with her husband and three children.

Betty was preceded in death by her husband, her parents, her sisters Ruth McMorris Oakes and Evelyn McMorris Reninger, and her brother Harry Conrad McMorris.  She is survived by her children Judith A. Baxter, Janet C. Baxter, Richard B. Baxter, Jr. and his wife Frances Blynn Baxter, her granddaughters Elizabeth Brooke Baxter and Louisa Adams Baxter, her sisters Lorna McMorris Smith and Carole McMorris Bosshart and her husband Gerald, and many nieces and nephews and grandnieces and grandnephews.

The family gratefully acknowledges Laura Martin, Loan Vo, the James Sears family, and the Noto family for their friendship and devotion.  The family also expresses their gratitude to the Mayo Clinic and Spectrum Health Visiting Nurses/Hospice for the excellent care Betty received.

A celebration of Betty’s life will be held at the Women’s City Club, 254 E. Fulton, Grand Rapids, Michigan, on Saturday, March 26, 2016, with a service beginning at 1:30 pm and a reception to follow.