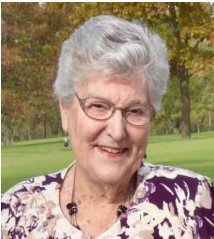 A public library of your choosing

Marilyn R. Simmons, 96, of Grand Rapids Michigan, passed away suddenly Wednesday March 23, 2022 following a full and meaningful life. She was born August 15, 1925, in Battle Creek Michigan. Marilyn grew up in Battle Creek, where she married her high school sweetheart, Harley G. Simmons, Jr, and they were married for 47 years. She was a member of the First United Methodist Church and actively involved in the community. She received her Bachelor’s Degree from Albion College and was an English school teacher for many years. She, later, received her Masters of Library Science Degree from Western Michigan University. She became a librarian at Kellogg Community College, followed by years as the librarian at Southwestern Jr. High
School. After moving to Grand Rapids, she became a member of Trinity United Methodist Church. She served on the Library Committee at Clark Retirement Community at the Franklin Campus with several of her friends. Her hobbies included quilting, reading, word puzzles, and games. She was an accomplished pianist and enjoyed music of all kinds. Marilyn loved her family and was proud and thankful for her long and happy life. She is survived by her daughters, Joy L. Murphy (Mike), Peggy E.S. Woodruff (Tony), Karen J. Frederick (Brian), and Marcia E. DeBoer (Jeff), grandchildren Christopher Frederick (Bridget), Andrew Woodruff (Louise), Eric Murphy (Lauren), Peter Woodruff (Johanna), Lindsey Huffman (Joshua), Elizabeth Waddington (Quinn), Becky Bosker (Matt), Karl DeBoer (Betsy), and Anna Adams. She had 21 great grandchildren. She is also survived by Kenneth Simmons, her brother-in-law, and many nieces and nephews. She was preceded in death by her husband, Harley G. Simmons, Jr., his brother, Dennis, his sisters, Katherine Lammers and Jean Pio, her brothers, J.Thomas Adrianson and Gerald (Jerry) Adrianson, and her grandson-in-law, Matthew Adams. We will always embrace the positive influence she has given to all of us. The family will receive friends on Saturday, April 16th at noon until the celebration of her life begins at 1 p.m. at Trinity United Methodist Church 1100 Lake Dr. SE Grand Rapids MI 49506. The service will be live streamed at this link: https://youtu.be/it3Q2lK9MGw In lieu of flowers, the family suggests a contribution to Clark Retirement Community Library Fund, or a public library of your choosing. And, please, think of her the next time you read a book, she would like that.