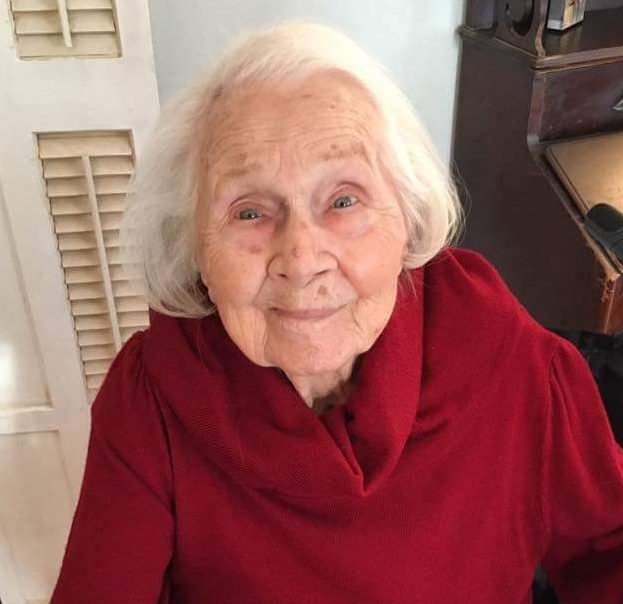 Marion E. Monks was born in a small farmhouse on the south side of the Grand River in Lowell Township. She was the fourth of four daughters born to Guy and Esther (Stevens) Monks. Growing up on the little dairy farm was a delight to her-from chores to playing in the creek to truly walking thru knee deep snow to attend Snow School. Her family was blessed to hear all about her childhood which almost seemed like fairytales to the generations that followed: taking a pony cart to school with her sisters, her mother warming soap stones in the wood burning kitchen stove and putting them in her bed to keep her warm during cold winter nights or playing tag with their billy goat. She taught us a love for nature, patience, and perseverance. As a member of the Greatest Generation, she led her family through periods of illness, war, financial struggles, epidemics, grief, joy, pandemics and much more by her actions and deeds. There was always room for one more around her table.

Marion attended Lowell High School and graduated with the class of 1936. Her father took her to downtown Lowell to purchase her first store-bought bathing suit to wear on her class trip to Lake Michigan. In later years, she was still surprised that her parents had been willing and able to make such a generous cash-transaction gift. It was during her high school years that she met the fellow, Richard L. Rutherford, from town that she would later marry and raise a family. She recalled that he would bring her newspaper clippings for weekly current events assignments as her folks didn’t receive a paper. He loved visits to her parents’ cozy farmhouse.

Marion and Richard L. Rutherford eloped in July of 1936, and married in Bowling Green, Ohio. She told us that even though the depression had ended money was still tight and factored into their decision. The women of the Snow Community hosted a bridal shower for her upon her return and to this day she has a cookie jar that she received as a gift. They started married life in an upstairs apartment at his parents’ home on Hudson Street in Lowell.

The celebration of the birth of their first child June of 1937 was short-lived as their precious baby boy did not live to come home from the hospital with them. In November 1938, they welcomed another son, Richard John, who was delivered in their upstairs apartment. Longing for a yard, a picnic table, and a clothesline of her own, she and Richard moved across the Flat River to a one-story home on Lafayette Street in 1942. Marion and Dick had two more children, Stephen Fallas in 1945 and Julie Ann in 1954. Her home welcomed many generations of family, friends, and neighbors as well as all of her children’s friends. She was fortunate indeed that many of these people stayed in touch with her during her remarkable 103 years of life on earth. She was blessed to have family, caregivers, and in-home health care so that she was able to remain in her beloved house up until her passing.

At this time, the family wishes to extend a special thank you and express our gratitude to Sarah and Tyler DeBrot who cared for Marion during the last six years of her life. Relocating to live with her was the catalyst that allowed Marion to continue living in her home. They rarely missed an opportunity to get her on her porch during nice weather, made sure that she had meals that she enjoyed and kept her involved in the world around her. Just as she cared for others, she was cared for when the time came that she required assistance.

Marion attended the very first Lowell Showboat performance with her parents and subsequent seasons with her high school girlfriends. She and her sister, Norma, dressed up like “hippies” and traveled by canoe to the 1975 Reo Speedwagon concert at the Showboat. Her last visit to the showboat was during the summer of 2021 when she was able to see the new boat in the water.

Activities included frequent visits to her parents’ farm, picnics, hikes, camping, fishing, Lowell Showboat Garden Club, Lowell Congregational Church Deb Group, Boy Scouts, Campfire Girls, Card Club, Fallasburg Historical Society and more. She worked at the local dime store when she was newly married, worked at a factory in Ionia “spitting and pounding tacks” during the war years, maintained the home front when her husband was called into the Army during World War II, and traded food and gas ration allocations between her sisters to make sure everyone had what they needed.

Marion started working in the Lowell Area Public School System in the mid 1960’s. Some may remember her as the hot-lunch lady who would occasionally slip a slice of fresh baked bread or a cookie straight from the oven to a hungry teacher or student. This was probably not an acceptable practice but those at the receiving end were always grateful. She loved her work at the schools-the teachers, students, and support staff in the various buildings. She chose to retire at 70 years old because she was expecting her first grandchild. Four years later she welcomed her second grandchild and the two of them became her life’s pleasure and passion. Once again, she was filling her home with children, their friends, and their pets. In 2020 Marion was blessed with her first great grandchild. When asked who she would want to tell first she responded, “probably their great grandfather.”

A private service was held at Roth-Gerst Funeral Home with internment at Lowell Oakwood Cemetery. In lieu of flowers, donations may be made in her memory to MomsBloom (momsbloom.org) Grand Rapids, MI, an organization to connect families in Kent and Ottawa Counties with newborns to passionate community members who provide hands-on postpartum support.