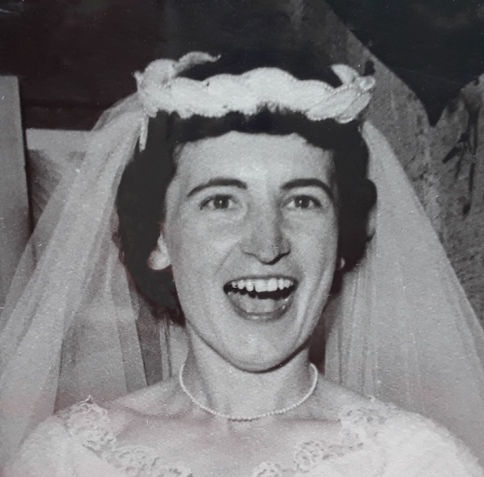 The Killgoar Foundation at IHM Parish

RICHARDSON (GENGLE) MARY ANN, age 98, of San Diego, CA, formerly of Grand Rapids, MI, the matriarch of the Gengle Family, ended her earthly journey surrounded by family at her bedside in her own home and awoke to a new life in the early morning of August 29, 2020.  While still sharp as a tack, her body couldn’t keep up any longer, and she chose to savor her remaining days in the loving care of her family, with the special help of Elizabeth Hospice.  Mary was joyfully greeted in heaven by her parents, Joseph and Mary Gengle; her husband, George Richardson; as well as her brothers, Ed, Frank, Bill, and Tony, along with half-brothers John, Andrew, Sebastian (Sam), Thomas, Steven, and Joseph Serna.  She always carried on faithfully in their wake.  Mary was the second of five children, and is survived by her children, Cathy Beeson, and Chuck Richardson, both of San Diego; along with her grandchildren, Summer, Savanna, and Sierra Beeson; her sister-in-law, Virginia Gengle of Grand Rapids; and several nieces and nephews.  Mary experienced her share of tragedies along the way, but her Catholic faith never wavered, and she was always defined by her determination to be a good and faithful servant of the Lord.  Born in Charlevoix, Michigan on October 12, 1921, Mary grew up on a farm during the Roaring Twenties, lived through the Great Depression, and graduated from Charlevoix High School in 1939.  After working for the phone company in Charlevoix, she entered Mercy Central School of Nursing in Grand Rapids in 1943, graduated in 1946, and began a long career as a registered nurse.  She would make her home in Grand Rapids for the next 53 years.  In 1957, she married George Richardson and started a family.  After her husband George’s early death in 1978, Mary relied on her skill and savvy to continue educating and providing for her children, and later, her grandchildren.  She had a bevy of lifetime friends which she gathered up along the way from St. Mary’s Grad School in Charlevoix, Charlevoix High School, Mercy Central School of Nursing, St. Mary’s Hospital where she was employed for over 25 years, along with Immaculate Heart of Mary Parish in Grand Rapids, plus her neighbors on Shawnee Drive throughout the 70s, 80s, and 90s.  Her greatest passion was golf and she enjoyed playing in the Grand Rapids Metro League, along with the IHM Women’s League.  She followed Grand Rapids Catholic Central football along with girls and boys basketball passionately for years.  In her later year, she became close to people she met at St. Brigid’s Parish in San Diego, but always kept her close connections with her friends and family in Michigan.  Our last days with her were too few, but we will always remember the good times fondly.  We thank the Lord for her quick and easy passage, but we will miss her dearly.  A visitation will take place at 10:00 AM, Friday, September 11, 2020 at Immaculate Heart of Mary Church, 1935 Plymouth Rd SE, Grand Rapids, Michigan followed by a Mass of Christian Burial at 11:00 AM, Father Troy Nevins presiding.  Burial will follow at Woodlawn Cemetery.  In lieu of flowers, please consider a donation to one of the following charities in her memory:  Elizabeth Hospice, 500 La Terraza Blvd., Suite 130, Escondido, CA 92025, St. Brigid’s Parish Education Endowment, 4735 Cass St., San Diego, CA 92109, or The Killgoar Foundation at IHM Parish, 1935 Plymouth Rd SE, Grand Rapids, MI 49506.  The family is being served by Pacific Beach Mortuary in San Diego and O’Brien-Eggebeen-Gerst Funeral Home in Grand Rapids.