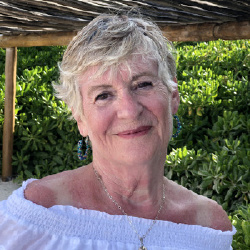 Mary Elizabeth Tesnar (Findling), age 70, passed away peacefully in the early hours of December 24, 2018, at Butterworth Hospital in Grand Rapids, Michigan after a short but valiant battle with cancer. She was surrounded in her last days and hours by loving family and friends. As Dr. Seuss once said, “Don’t be sad because it’s over, be glad because it happened.” Mary was born in Ludington, Michigan on March 6, 1948, to John and Hilda Findling. She was the fifth child of seven in her family. Mary attended St. Simon Catholic School in Ludington and graduated high school in the class of 1966. She then moved to Grand Rapids to attend Aquinas College where she joined the New World Singers Christian rock band and met her beloved husband, Bernard Tesnar. Mary studied Fine Arts in college and touched everything around her with creativity and color. Married on October 28, 1972, Mary and Bernard welcomed into their lives six loving children. Mary was blessed to stay at home with their children and returned to work when the youngest was in school. She was an active member of St. Stephens Catholic Church and sang in the choir for many years. Mary held an enthusiasm for life and those things that nourished her soul – being with her children and grandchildren, music and dancing (especially with Bernard), creative projects like sewing, painting and interior decorating, gardening, old movies and musicals and her spiritual relationship with Jesus. Mary was preceded in death by her parents, John and Hilda Findling; and three brothers, Robert Findling, Doug Findling and Gordan Findling. Mary is survived by her husband of 46 years, Bernard; daughter, Kirsten (Anthony) Svejda; and sons, Andrew (Gina) Tesnar, Gregory (Allison) Tesnar, John (Megan) Tesnar, Michael (Natasha) Tesnar and David (Katie) Tesnar; her nine beloved grandchildren, Ella, Guy, Isaiah, Cooper, Elijah, Jackson, Luke, Josephine and Hudson, whom she cherished with her whole heart. She is also survived by her sister, Anne (Richard) Lint; brothers, John (Barbara) Findling and Jeffrey (Juli) Findling; as well as many nieces, nephews, cousins and friends. A celebration visitation will be held at O’Brien-Eggebeen-Gerst Chapel, 3980 Cascade Rd SE, Grand Rapids on Thursday, December 27 from 5-8 PM with a Vigil Service at 5:15 PM. A Mass of Christian Burial will take place at St. Paul the Apostle Catholic Church, 2750 Burton St SE, Grand Rapids on Friday, December 28 at 11 AM with visitation one hour prior. Rev. Scott Nolan presiding. Memorial contributions may be made in Mary’s name to St. Jude Children’s Research Hospital, P.O. Box 1000 Dept. 142, Memphis, TN 38101.