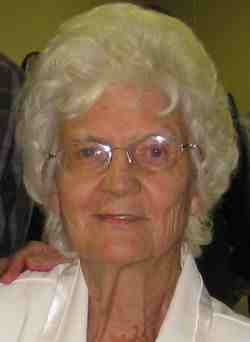 A jitterbug queen in high school and a point guard in college, Mary F. O’Driscoll, died on Tuesday, June 2, 2015. Born to Sam Prosak and Annie Gillespie on February 29, 1932, in Allentown, PA, she was a nursing student at St. Agnes in Philly when she met a young doctor from Ireland. Within a week, he asked her “to tea,” she said “yes” (even though she didn’t think Philadelphia had any tea shops) and they spent the rest of their lives together. A lady with a sweet tooth, Mary was known to order a dessert as her main course, followed by another dessert for dessert. She is re-united with the love of her life, Dr. William G. O’Driscoll. She is survived by her children: Bill (Kathy) O’Driscoll of Onalaska, WI, Kathy O’Driscoll of Waterford, MI, Patty (Doug) Callaway of Onekama, MI; Brian (Teri) O’Driscoll of Grand Rapids, and Brendan (Christine) O’Driscoll of Grand Rapids; her grandchildren: Brian (Erica), Patrick, Shannon (Jonathon), Justin, Erin, Shawn (fiancé Garrett), Eric, Chase, Alex (fiancé Jordan), Mary, Liam, Matt, Kevin, Meghan, Colin, Ryan and Erin; her great-grandchildren: Malana, Leyah, Shamari, Jayonna and Mason; and her favorite brother Gerard Magellan Prosak. She was preceded in death by her husband of 60 years, William G. O’Driscoll, and her daughters, Maureen and Ann.
I could not stay another day
To love, to laugh, to work or play
Tasks left undone must stay that way
And if my parting has left a void
Fill it with remembered joy.
Visitation will be on Friday, June 5 from 4 PM to 7 PM at the O’Brien-Eggebeen-Gerst Chapel, 3980 Cascade Rd, S.E., Grand Rapids, MI. Mass of Christian Burial will be celebrated on Saturday, June 6 at 10 AM at St. Robert of Newminster Church, 6477 Ada Dr., Ada, MI. Rev. Leonard Sudlik presiding. Interment Resurrection Cemetery.
In lieu of flowers, memorials may be given to the Hauenstein Neuroscience Center, Mercy Health, 220 Cherry Street SE, Grand Rapids, MI 49503.