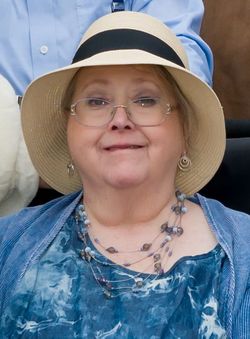 Melanie left this world to join her Lord and Savior in His Kingdom, eternally pain-free, whole in body, and reunited with her loved ones and those who preceded her.

I lift up my eyes to the hills – where does my help come from?
My help comes from the LORD, the Maker of heaven and earth.
Psalm 121

Melanie is survived by her husband and best friend of 41 years, Major James P. Searfoss, U.S. Army (retired) and three daughters: Jennifer Searfoss and husband Timothy Huddleston of Ashburn, Virginia; Shannon Ruth and husband Jason Carpenter of Kent City; and Caitlin and husband Bobby Oliver of Lowell. She was also blessed and survived by her three beloved grandsons: Brody and Dylan Carpenter, and James Thomas Oliver. Melanie is also survived by her two sisters: Marsha and husband Stan Gray, and Meredith Jacobs; her nieces Heather Morelli and husband Kevin Griffin, and Arielle Schoen; and grand-niece Julianna Morelli. Also surviving her, and her sister by heart and closest friend of 54 years, is Dr. Deborah Smeltzer Gray. Melanie was preceded in death by her mother Casey Jacobs; father Alvin Jacobs; brothers Joseph and Jeffrey Jacobs; and beloved calico cat, Pirate.

Melanie graduated in 1969 from Worthington (Ohio) High School, and in 1972 from Riverside White Cross School of Nursing (Columbus, Ohio). She spent most of her nursing career in pediatrics before becoming an Army wife for 21 years. When she used her RN degree it often was as a full-time mother, horse show Mom, bowling spectator, and softball, soccer, basketball sideline fixture before becoming a full-time Cheer Mom for five years.

Throughout her life, Melanie was an avid reader from dictionaries to romance novels. Thanks to her great-grandmother Louise’s influence, she became addicted to quilting. At 40 she learned to quilt and joined the Keepsake Quilters of Lowell in 1998. Later in life Melanie became fascinated by gems and jewelry-making.

Melanie was a lifelong Lutheran and believed deeply in the Lord. Mercy and thankful to Him for the many blessings He bestowed upon her and her family.

In lieu of flowers, Melanie asked for contributions to Newaygo County Autism Community, St. Jude’s Children’s Hospital or the National Wildlife Federation. At the celebration of Melanie’s life, the family reminds everyone to wear purple, Melanie’s favorite color.