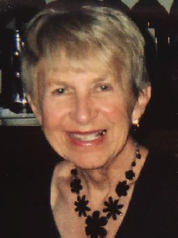 away Friday, February 16, 2018 after a 7-year battle with Frontal Temporal

Lobe Dementia. She was preceded in death by her daughter Denise Marie

She is survived by her husband of 54 years Richard; sons Michael DeLano

nieces and nephews. Born March 19, 1939 in Ludington, Michigan to

Stanley and Mable (Yeck) Rosplock, she relocated to Grand Rapids,

Michigan after graduating from Central Michigan University in 1960. She

served as a second-generation elementary school teacher and consultant for

the Grand Rapids Public Schools, retiring after 30 years of service. She met

and married Richard in Grand Rapids in 1963.

resided there ever since. Her Catholic faith was the foundation of how she

lived her life; devoted to her family as a daughter, wife, mother and most

recently as a grandmother. In the spring, you could find her tending to her

English garden and enjoying all of nature and animals, including her

She loved spending warmer months at her childhood family home in

Ludington, Michigan. In any season you could find her walking her dogs

and avidly engaged in books on American history, autobiographies or

current events of the day. She had a passion for her homes and baking,

zest for international travel with her husband and children. She believed

is what truly matters in one’s life. This was reflected in her daily interactions

her husband identified with.

She was a patron of the arts, including the Grand Rapids Symphony.

Friends and family will sorely miss her reflective and thoughtful guidance.

during her illness, as well as the entire staff at the Mercy Health Hauenstein

Neuroscience Center. The family will meet with friends, neighbors and

relatives during visitation hours from 6-8:00 p.m. on Monday, February 19

Mass of Christian Burial will be celebrated Tuesday, February 20, 10:00

Memorial Park. In lieu of flowers, memorial contributions may be made to

Habitat for Humanity of Kent County, Sea Turtle Conservancy or the