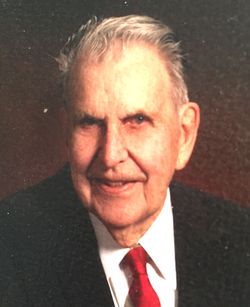 Ralph J. Schlosser, MD, age 98, of Ada, passed away peacefully February 2, 2017, under the care of the wonderful staff at Clark on Keller Lake and Emmanuel Hospice. A devoted Catholic all his life, he was born November 25, 1918, in Mukilteo, Washington, graduated from O’Dea High School at age 17 where he excelled in Latin, Mathematics and English, played center for the football team and earned letters in basketball and baseball. In 1936, he went to Gonzaga University in Spokane, Washington, to play football for the Bulldogs. Upon graduation in 1940, Ralph turned down an offer to play for the Chicago Bears, opting instead to pursue medicine at Jefferson Medical College in Philadelphia. However, his desire to serve his country was such that in 1942, he enlisted in the US Navy and trained as a fighter pilot in Pensacola, Florida. He flew 51 combat missions in the Pacific from the aircraft carrier USS Jacinto and was decorated with the Navy Air Medal, the Navy Cross and two Distinguished Flying Crosses. Upon his return and the completion of medical school in 1948, he married Ann Duffy, the love of his life for 68 years. Ralph’s training took the Schlossers back to Seattle for an internship and residency in general surgery. They subsequently moved to Detroit for Ralph’s residency in thoracic surgery at Henry Ford Hospital. While there, Ralph met Dr. Leo Kenny and together the two families moved to Grand Rapids to set up a practice in thoracic surgery at Butterworth Hospital. In 1959, Ralph and Dr. Kenny, assisted by Dr. Luis Tomatis, chief resident at Henry Ford Hospital, performed Butterworth’s first two open-heart cases. Ralph later became Chief of Surgery at Butterworth Hospital until his retirement in 1973. Ralph is predeceased by his son, J. Kevin Schlosser, son-in-law Joseph Burdzy, and brothers Roland and Robert. He is survived by his wife, Ann, daughter, Molly, and grandchildren Kathryn, Stephanie and Molly Burdzy, and Marguerite Schlosser. The family is most grateful to the staff of the Clark and Emmanuel Hospice for making the last days of his life peaceful, meaningful and comforting for him and his family. The Mass of Christian Burial will be held at St. Robert of Newminster Parish, 6477 Ada Drive, Ada, Monday, February 6, at 11:00 am. Rev. Colin Mulhall and Rev. Rock Badgerow presiding. The family will meet with friends and relatives one hour prior to the mass. A memorial contribution may be made to San Juan Diego Academy, 1650 Godfrey Ave. SW, Wyoming, MI 49509.