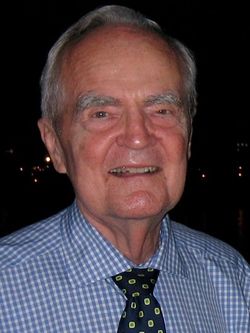 Richard Leo Cline of Grand Rapids, formerly of Saginaw, MI passed away Tuesday November 8, 2016, age 86. Richard was born April 28, 1930 in Flint, MI, the 3rd of the 6 children of Leo D and Helen (Wolohan) Cline. His siblings are Charles (deceased); Elizabeth (Robert) Brines, Midland; Thomas (Joanne) Cline, Saginaw; Mary Margaret (Daniel) Collins; Midland; Helen Jo (Frederick) Brenner, Grand Rapids. Additional survivors are 16 nephews and nieces. Richard had a multitude of “permanent” residences: Flint, Birch Run, Saginaw, Detroit, Ann Arbor, New York City, Budapest, Hungary, Chicago, and Grand Rapids. He moved to Saginaw in 1937. He was a graduate of St. Mary High School in 1947 where he was salutatorian. He received a BS in Mathematics from the University of Detroit in 1951 and a Masters in Mathematics in 1952 from the University of Michigan. Upon graduation from U of M, he was employed by IBM at its World Headquarters in New York City. He became a “paying boarder” in the Brownstone residence of Mrs. Christopher Wyatt, a descendant of old-line New York families, a drama critic and the mother of actress Jane Wyatt.  Mrs. Wyatt, Jane (life-long friend of Richard), and a changing “select” group of boarders from the US and Europe expanded Richard’s knowledge of drama, opera, art, ballet, music, Broadway, museums, Europe, and history. Communal meals at Mrs. Wyatt’s were adventures. Richard was a member of the Development Team of IBM’s first commercial computer. While a NYC resident, he served IBM in NYC, Poughkeepsie, White Plains, and Armonk, reverse commuting when its World Headquarters moved. Richard took a leave of absence in 1962 to work at the first computing center for the Vatican in Gallarate, Italy followed by studies in Grenoble, France where he earned a degree in French. In 1974, Richard was assigned by IBM to teach computer science at Moorehouse College in Atlanta, Georgia. He retired from IBM in 1985 and took up residence in Budapest Hungary in 1994 as a base for European history, culture, travel, museums and opera. Richard made many life-long wonderful friends in England, France, Germany, and Hungary during his frequent trips, assignments, and residence in Europe. He was an excellent travel guide escorting friends and family through NYC and Europe. His nephew Tom Brenner was very close to Richard and accompanied him on many of his trips in Europe, including England, Turkey, Greece, and Eastern Europe. In 2010, Richard moved to Chicago to be closer to his family. In 2013, he moved to Grand Rapids, MI. His family expresses their sincere appreciation to Helen Jo, Fred, and Tom Brenner for their compassionate care and assistance to Richard. Funeral Liturgy will take place at St. Mary Cathedral Parish at St. Andrew’s Church, 612 N Michigan Avenue at 10 am on Monday, November 28, 2016. Richard’s family will be present at the Church at 9 am until the time of Mass. Those wishing to express their sympathy may consider memorials to the Leo D and Helen Wolohan Cline Scholarship Fund at the University of Detroit Mercy, the St. Mary Cathedral Renovation Fund, or to a charity of their choice.
Local arrangements by: Deisler Funeral Home, Saginaw, MI www.deislerfuneralhome.com