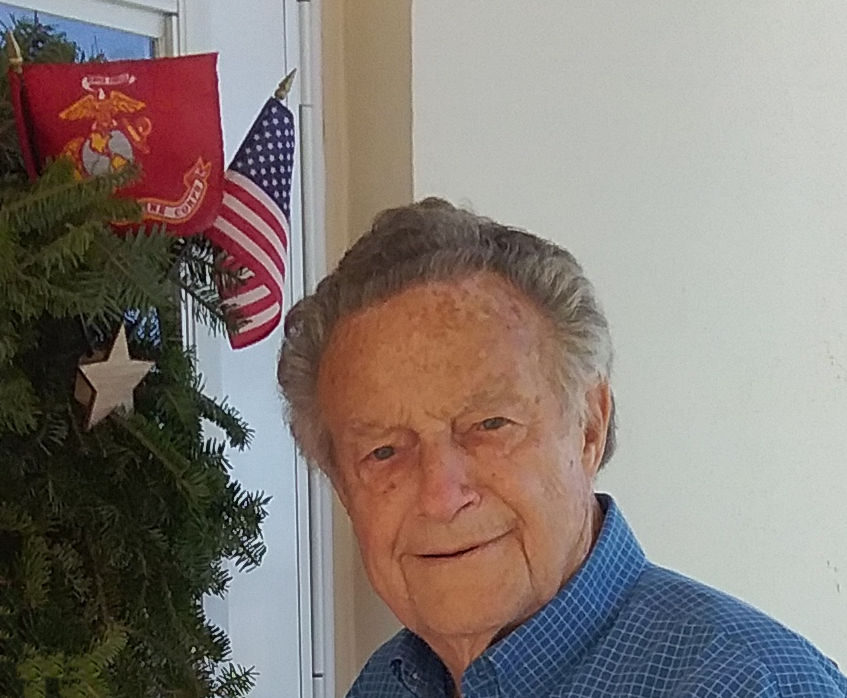 Richard (Dick) M. Doezema, Lieutenant Colonel, United States Marine Corps (Retired) has completed his journey on earth and has gone home to Jesus on June 18, 2021.  Dick was born in Grand Rapids, MI in 1924.  He was preceded in death by his loving wife of 59 years, Barbara (Bobbie), infant daughter, Darby, his second wife, Jamie Emerick, sisters Marjorie Post and Donna Blocher, brother John Linton, brothers-in-law Gerrit Post and Paul Blocher, grandson Scott Brewer and Jamie’s children Daniel Emerick and Jennifer VanSumeren. He is survived by his wife Jan (Ballas) Doezema and his children, Robin (Allen) Barton, Sharon (David) Brewer, Dawn (Douglas) Seeley, his grandchildren, Matthew (Catherine) Barton, Rebecca (Chris) Hirt, Dillon (Isa) Seeley, Dana Seeley, Stacy Brewer, and seven great grandchildren.  He is also survived by son-in-law Thomas VanSumeren, Tom’s children William and Benjamin, Jan’s daughter Tera (Jeff) Young and their children Cora and Lily. Yes, he served all of us as a Marine and farmer, but a big part of his heart was reserved for his family. Teaching morals, kindness, history, respect, honor, love, serving others and faithfulness through the stories of his life.  Teaching us all how to fish, garden, drive a tractor, negotiate, catching baby animals as they are born, make vegetable soup…. He attended Caledonia High School. During his junior year, he joined the Marine Corps. He participated in the invasion of Tarawa, Saipan, Tinian, Okinawa, and the occupation of Japan after WWII. He landed at Inchon, Korea as Artillery Forward Observer with a Marine Infantry Company. He participated in six campaigns including the Chosin Reservoir in North Korea with temperatures 30℉ below zero, was wounded twice and received the Navy Cross, the Bronze Star for Valor, and the Purple Heart with a Gold Star for his service in Korea. He completed high school through the GED test and received his diploma from Caledonia High School.  He graduated from the University of Omaha with majors in History and Political Science. He was the Honored Alumnus of the Caledonia Education Association. He served 22 years in the Marine Corps including two years with the Navy and three years with the Army at Fort Sill, OK. Dick retired from the Marine Corps as a Lieutenant Colonel and became a farmer near Lowell.  Dick was a life member of the Legion of Valor, the Marine Corps League, Veterans of Foreign Wars, American Legion, and Military Order of the Purple Heart. Dick served in many positions at Snow United Methodist Church of Lowell as well as with the UMC District and Conference. He is remembered for his work for World Hunger including the Grand Rapids and Lowell Hunger Walks. Dick gained the greatest satisfaction and joy from his work at Snow Church and for World Hunger that took him to Senegal, Africa, Honduras, Nicaragua, El Salvador, India, and Bangladesh.  A highlight of his travels was the opportunity to meet and speak with Mother Teresa in Calcutta, India. He married Jamie Emerick and enjoyed their many travels until Jamie passed. A few years later, Dick married Jan Ballas and they lived in Michigan during the summer and wintered in Florida. Jan brought friendship and laughter to his life. She has served as his loyal champion. Words cannot express our profound appreciation to Hospice of Michigan, especially Theresa and Erika. In lieu of flowers, please consider donating to Hospice of Michigan (hom.org) or Wounded Warriors (woundedwarriorproject.org/donate). Visitation will be from 2-4 p.m. and 6-8 p.m. on Sunday, June 27, 2021, at O’Brien-Eggebeen-Gerst Chapel, 3980 Cascade Road SE, Grand Rapids MI 49546.  Services will be held at 11:00 a.m. on Monday, June 28, 2021, at Ada Bible Church, 8899 Cascade Road SE, Ada MI, with visitation one hour prior. Pastor Kyle Pierpont officiating. Interment at Whitneyville Cemetery.