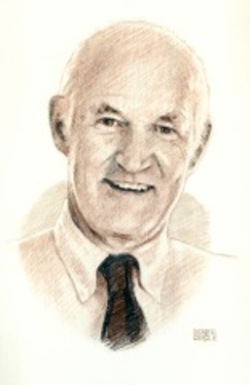 Robert Frank Stoming, age 90, of Grand Rapids, formerly of Kalamazoo, passed away Thursday, June 26, 2014. He is survived by his wife Phyllis Stoming, children Leah (Greg) Hooks, Susan (Robert) Ozburn, Karen Bradshaw, Robert Stoming, grandchildren Brian (Christine) Hooks, Kevin (Lindsay) Hooks, Katie Hooks and her fiancé, David Powell, Robert (Becky) Ozburn, Kristen Ozburn and her fiancé Shane Countryman, Kelly (Scott) Verhage, Robin (Whitney) Brown, Lauren Bradshaw, Lisa Bradshaw, great grandchildren, Mackenzie Hooks, Alythia Ozburn and Parker Brown and brother Frank Stoming. He was preceded in death by his parents Frank and Helen Stoming, stepmother Mary Stoming, and sister Florence Onohan. Bob was a dedicated husband and father. He was proud to have served in the U.S. Army during WWII. He met Phyllis Tucker in 1947 and they were married in 1949, in Hammond Indiana. Bob studied at Chouinard Art Institute in Los Angeles and later at Purdue University. He was a gifted artist who began his career with Pullman Research and Development, then moved to the design department at Raymond Loewy Associates in Chicago, Illinois. In 1957, Bob moved his family to Kalamazoo and became Art Director for Sutherland Paper Company which later became James River Corporation. He was a mentor and inspiration for many young designers over the course of his career. Bob retired in 1986, maintaining a private design firm for several years. After 50 years in their home on Tipperary Road, Bob and Phyllis moved to Grand Rapids in 2007 to be closer to family. They most recently lived at Heather Hills Retirement Village where Bob made many new friends. Bob was known internationally for his packaging and graphic design talents. He received numerous awards including two Clio Awards for excellence in advertising design. He was an avid gardener and rosarian and a talented furniture craftsman. He loved fishing and camping with his family. His passion for jazz, cooking and modern design is a legacy he leaves his children and grandchildren. A dedicated Notre Dame fan he always looked forward to going to South Bend in the fall to cheer on the Irish. Bob was a very loving man, always humble, with a great sense of humor, a great husband, father, grandpa, and friend to so many. He will be missed. A memorial service will be held at a future date, yet to be determined. Contributions in Bob’s memory may be made to WMU School of Music Jazz Studies Program (www.wmich.edu/music), Kalamazoo Institute of Art (www.kiarts.org) or Hospice of Michigan (www.hom.org).