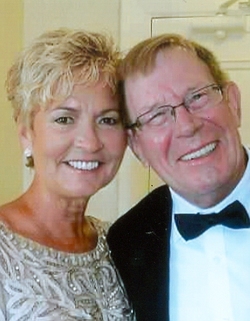 Robert “Bob” Joseph Freiburger, 62 of Grand Rapids, entered heaven on Saturday, April 29, 2017 after a brief fight with cancer. He was surrounded by family in his final moments. He was preceded in death by his parents Donald and Dorothy Freiburger; and sister Karen Magdafessel. He is survived by his wife of 38 years Marsha; children Reneé (Michael) Morasso, Kristen (Chris) Hiller, Lindsey Freiburger; mother-in-law Donna Hagen; brothers Jim (Gayle) Freiburger, Donnie Freiburger Jr., Rich (Kim) Freiburger; sisters Linda (Ken) Mork, Maggie (Bob) Vugteveen. Bob was a man of deep faith, with strong ties to the Catholic church. He grew up attending school at St. Alphonsus, and later Catholic Central, where he met his wife, Marsha. Bob and Marsha have been long time parishioners at the Cathedral of Saint Andrew. His faith instilled in him a set of values that were apparent from the moment you met him. Bob was a man of integrity. Bob’s greatest joy was his family. He and Marsha were a dynamic duo, from raising their children, to running a business – they navigated life together. He and Marsha devoted their lives to their three daughters, Reneé, Kristen and Lindsey. Bob never missed an opportunity to spend time with “his girls”, whether it be watching a movie by the fire, playing a hand of Euchre, or cracking open a Coors by the pool. He was their biggest fan and constant support. A void will be left among his family and friends, as Bob was like a brother to many. From a young age, he was known among his friends as “Fritz”. Bob savored the time spent with his buddies. Some of his favorite memories included sneaking in a round of golf, barbecuing in the sun, watching the Wolverines win, hanging out in the barn, or making a pit stop at the Elbow Room. His laidback personality, contagious laugh, and witty sense of humor will be missed. Bob was a builder in many aspects of the word. He spent his life building relationships and community, and even built the home in which he and Marsha raised their children. Their home was and will continue to be a place for love, laughs and gatherings for neighbors, friends and family. It was only natural for Bob to find success as a contractor for forty years. He touched countless lives through his work, and used his profession as an opportunity to extend generosity. Bob’s values were evident to those he encountered. He was hardworking, dependable, and he was always trusted to get the job done. Those that knew Bob knew that he was a man of few words, and would be telling us now to stop talking about him. He was the ultimate victor. Go Blue! Visitation will be Wednesday 2-4:00 p.m. and 6:30-8:30 p.m., with a vigil service at 8:00 p.m. at O’Brien-Eggebeen-Gerst Chapel, 3980 Cascade Rd. S.E., Grand Rapids. On Thursday, there will be a visitation at 1:00 p.m., followed by Mass of Christian Burial at 2:00 p.m. at the Cathedral of Saint Andrew, 301 Sheldon Blvd. S.E., Grand Rapids. Rev. John Geaney CSP will be presiding. The Freiburger family has been overwhelmed by an outpouring of support from family, friends, and the community.  Bob always valued the importance of giving back. Therefore, in lieu of flowers, the family requests that contributions be given to a charity of your choice.