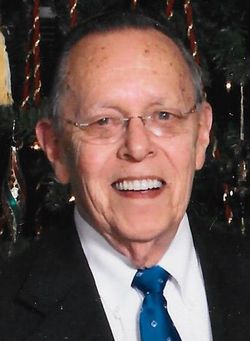 Robert Lawrence Tupper MD (“Tup”) of East Grand Rapids died on January 18, 2015 at the age of 85. He was predeceased by his brother C. John Tupper of Davis, California, and his sister Grace T. Licursi of Sacramento, California. He was also predeceased by his loving wife of 53 years, Garland B. Tupper in 2007. Two of their six children have also died: Robert L. Tupper Jr. (Randi) of Grand Rapids and Elizabeth A. Tupper of Bath, Michigan. Tup is survived by sons William (Leah), Thomas and Colleen (Caitlin, Kelsey, and Megan) of East Lansing, and daughters, Meredith and partner Jann Mouer of Olney, Maryland and Catherine Duso (Evan) of Springfield, Virginia. Also surviving are the children of Robert Jr, Michelle, Lance, and Chris. Tup is also survived by his loving and much beloved wife Janet-Sue Strait who married him in 2011, and her son Nathan Strait. Tup was born and raised in San Diego California, graduating from Point Loma High School. He then graduated from the University of California at Berkeley and then transferred to the University of Nebraska. From Nebraska he received both the M.D. degree (cum laude) and a Masters degree in pharmacology. From there he went to the University of Michigan in Ann Arbor where he completed his internship and residency in internal medicine as well as a preceptorship in gastroenterology. In 1965 Tup was asked to take a new type of position as a Director of Medical Education at Pontiac General Hospital, a University of Michigan affiliate. He served there for five years and then became the executive director of regional medical programs for the state of Michigan. Subsequently, in 1973 Tup moved to Grand Rapids where he was appointed as the Director of Medical Education at Blodgett Memorial Medical Center. He stayed in that position until the merger of Blodgett and Butterworth at which time he was appointed the Vice President of Medical Education for Spectrum Health. Early on, Tup was elected president of the Grand Rapids Medical Education Center. He served in that capacity for a period of tenure. He was also a founding member of the Michigan Association for Medical Education and as president of that organization drove their affiliation with the national association for medical education in Washington, DC. Within a few years he was elected president of Association for Hospital Medical Education and in that role he founded the Council of Transitional Year Program Directors. From there he was appointed to the national accrediting body in Chicago, for a period of six years. Tup was a founding member of the Michigan State Medical Society committee on continuing medical education accreditation. He subsequently served a period of 10 years as the chairman of this committee. During that time he worked closely with the national body, the Accreditation Council for Continuing Medical Education in Chicago. He was eventually appointed to that body and served in several capacities until finally being elected Chairman of the Council. At one point, he was Chairman of the national body, the state body and the Blodgett Hospital CME program. Tup retired in 1999. The next year, he was elected to the Grand Rapids Medical Hall of Fame and subsequently to the Spectrum Distinguished Physician Society. A few years later, Spectrum also awarded him the prestigious Lifetime Achievement award. Tup was very proud to receive the “National Outstanding Leadership” awards from AHME and ACCME. However, he was most proud of what he felt he had given medicine. He helped develop and administer the curriculum for residency programs in surgery medicine OB/GYN and orthopedics as well as the transitional year. He also was advisory to the residency in family practice. All of those had excellent accreditation records but more important their graduates had outstanding records on the national board examination. Collectively, over 1000 physicians have received a certificate of training with his signature in place. Tup not only mentored them with his medical expertise but also changed their lives with his kindness and sense of humor. Many stayed in Michigan and particularly in Grand Rapids in practice. After his retirement, Tup enjoyed watching Tiger baseball, U of M and MSU football, playing with his grandkids, and puttering in his garden. The family is proud to celebrate Tup’s long, accomplished life, and would like to express their gratitude to all of Tup’s healthcare providers, especially Spectrum Blodgett, for their superior care. Funeral service will be held Thursday 1:00 p.m. at O’Brien-Eggebeen-Gerst Chapel, 3980 Cascade Rd. S.E., Grand Rapids. Rev. Michael Fedewa of St. Andrew’s Episcopal Church officiating. Interment Woodlawn Cemetery. Visitation Wednesday 6-8:00 p.m. and Thursday 11:00 a.m. – 1:00 p.m. at O’Brien-Eggebeen-Gerst Chapel. In lieu of flowers memorial contributions may be made to Emmanuel Hospice, 2161 Leonard Street N.W., Grand Rapids, MI 49504 or a charity of one’s choice.