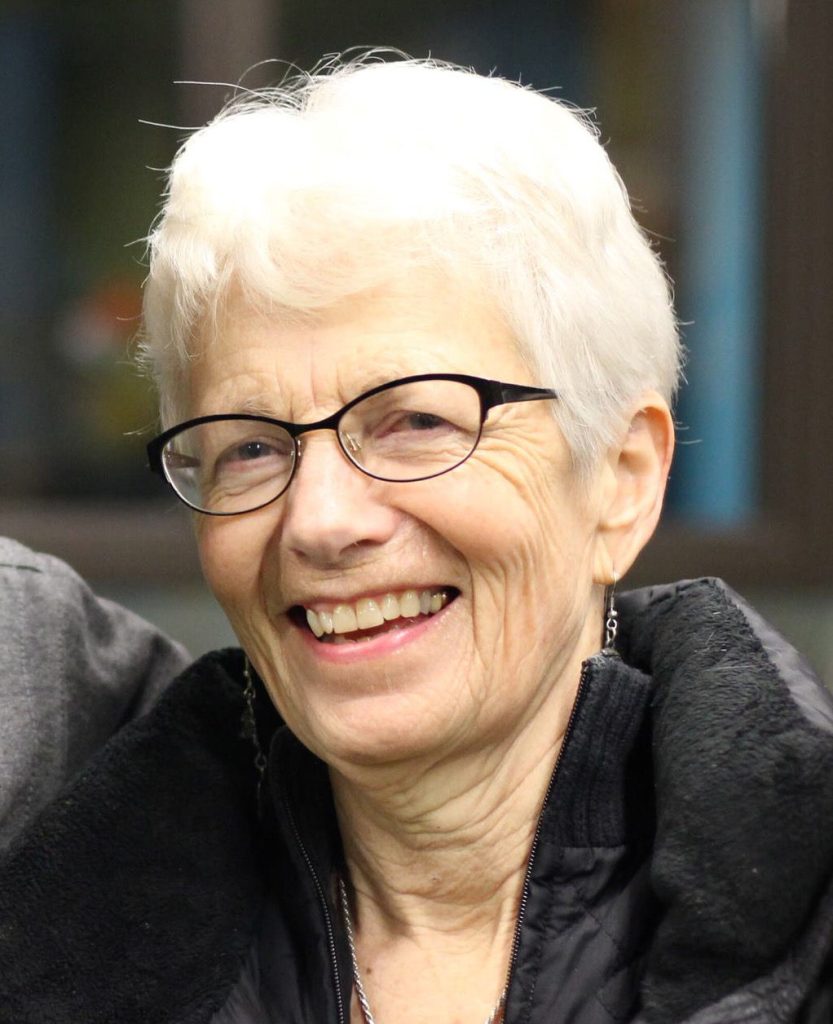 Teresa Rose “Terry” Foley, age 80, of Grand Rapids, died August 20 at Provision Living in Forest Hills. She was at peace, in the presence of family and under the care of Kindred Hospice at the end of a long illness.

Terry was born at home in Wyoming, Michigan on Aug. 30, 1941. She was the third of 13 children of Peter Hoogterp, a carpenter, and Dorothy Swem Hoogterp, a registered nurse. Her parents struggled financially — as they moved from the city to the country and back again — but passed along to Terry and her siblings a love of books and music, appreciation for the natural world, and a determination to support human rights for all people.

While embracing the joys of belonging to a large family, Terry also crafted a unique and meaningful life for herself. She was a teacher, a student, a mother, a deep thinker, and a life partner to her husband. She supported her children’s journeys into the worlds of music, drama, and business. She played guitar, read poetry and serious literature, and enjoyed tennis and other physical activities well into her 70s. The final chapter of her life was challenged by Parkinson’s disease.

Terry graduated from Kent City High School, received a bachelor’s degree from Aquinas College, and taught for several years at Cedar Springs High School. As part of her commitment to lifelong growth, she earned a doctorate in Clinical Psychology from Western Michigan University while in her mid-fifties.

She married John Patrick Foley, who survives her, in 1964 at St. James Catholic Church in Grand Rapids.

Terry and John’s home on Grand Rapids’ West Side was for decades a focus of activity for family and a large group of friends. They opened their home to many a traveler, and a shocking number of people have called that house on Willis Avenue home. Terry & John’s marriage continued for 58 years, and John was with Terry at her time of death.

Terry was preceded in death by her parents, and by siblings Frank Hoogterp, Thomas Hoogterp, Barbara Rowe and Mary Hoogterp.

Please join us for visitation on Thursday, August 25 at O’Brien-Eggebeen-Gerst Chapel, 3980 Cascade Rd. SE, Grand Rapids, MI 49546, 2-4pm or 6-8pm (with a scriptural rosary at 7:30pm). A Mass of Christian Burial will be celebrated for Terry on Friday August 26 at 10am at The Cathedral of St. Andrew, 215 Sheldon Blvd SE, Grand Rapids, MI 49503, with refreshments in the Parish Hall immediately following. We would love to see you there. If you would like to honor Terry in some way, consider a donation to the Blandford Nature Center, 1715 Hillburn Ave NW, Grand Rapids, MI 49504, where she spent many happy hours walking the trails and volunteering.