The Honorable Robert A. Benson 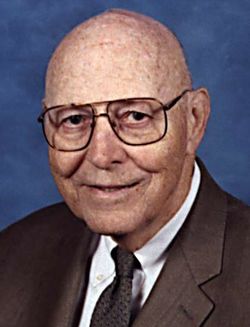 The Honorable Robert A. Benson, age 85 of Grand Rapids, passed away Tuesday, June 30, 2015. He was preceded in death by his wife of 61 years, Mary; and brother, John Benson. He is survived by his children, Margaret Benson (Arthur Simon), Meegan (Michael) Joyce, John Benson (Nicole Felician), Curt Benson (Jane Markey), Sarah Benson (Alan Mrozinski); grandchildren, Julia, Caroline, and Gina Simon, Sarah and Laura Joyce, Caitlin, and Robert “Bo” Benson, John, Mary, and William Mrozinski. Born in Grand Isle, Nebraska Robert was educated by Jesuits and the Fighting Irish of Notre Dame. Seasoned by the Marine Corps, he worked as a banker before he took his wife’s advice and went to law school. After graduating from Wayne State University Law School in 1961, he was admitted to the Michigan Bar and moved his family to Grand Rapids. Appointed to the circuit court bench in 1980, he served as Chief Judge between 1991 and 1994. Although he officially retired in 2000, he was not meant to spend all of his time playing golf, so he continued to work as a visiting judge in circuit and district courts around west Michigan until 2013. Judge Benson believed in legal scholarship, building character and giving back to his community. He readily donated his services, first as a practicing attorney, later as a judge, by sitting on the boards of organizations that help people. In recognition of his work and service to others, he received the Champion of Justice Award from the State Bar of Michigan in 2009 and the 2014 Lifetime Achievement Award from the Justice Foundation of West Michigan. While a young football player at Notre Dame—an all-boys school at the time—Bob met the love of his life: a smart, good looking redhead named Mary Cook who worked in the Notre Dame library. They married in June of 1953 and enjoyed 61 years together until Mary passed away last August. As father and mother to five often unruly children and grandparents to ten equally unruly grandchildren, their lives together were busy and full. Bob credited the Jesuits for teaching him how to think, the Marines for teaching him how to be a man and, most of all, his wife Mary for helping him through life. In his honor, we tunelessly sing a rousing chorus of “Roll Out the Barrel” while hoisting a beer and missing him deeply. Mass of Christian Burial will be celebrated Tuesday 10:30 a.m. at St. Thomas the Apostle Church, 1449 Wilcox Park Dr. S.E., Grand Rapids, MI 49506. Rev. James Chelich presiding. Interment Resurrection Cemetery. Visitation Monday 1-4:00 p.m. and 6-8:00 p.m. with Rosary recited 7:30 p.m. at O’Brien-Eggebeen-Gerst Chapel, 3980 Cascade Rd. S.E., Grand Rapids. Memorial contributions may be made to St. Thomas the Apostle Church.