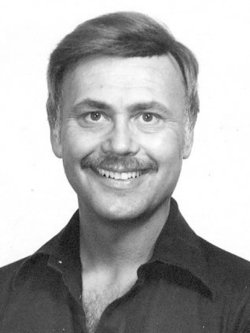 Thomas W. Richmond, of Lowell, born December 17, 1931, passed away Tuesday, November 15, 2016. He was preceded in death by his parents, Theron E. and Ruth A. (Hansen) Richmond; sisters, Shirley J. Smith and Barbara A. Curtis; all of Lowell. Tom worked as a “young employee” with his sisters in the family’s restaurant, Richmond’s Café (Larkin’s Restaurant), until 1945. It was an exciting and wonderful adventure that taught them togetherness is forever lasting. He also found out that a family who eats together, stays together! In 1946, he became involved with the Lowell Showboat, which influenced his desire to be in show business. After graduating from Lowell H.S. in 1950, he attended the American Academy of Dramatic Arts in NYC. In 1952, he left for Los Angeles and was briefly employed at Warner Bros. Studios before being drafted into the US Army. While enlisted, he served in the 101st Airborne Division in the Korean Conflict. He also worked as a News Journalist with the US Army Home Town News Center in Independence, MO. After being honorably discharged in 1954, he attended Davenport Business College and was employed by his brother-in-law Richard “Dick” Curtis, of Curtis Distributing Corp., Grand Rapids, as well as his father, Theron Richmond, of Richmond Real Estate, Lowell. Tom returned to CA in 1955, where he was employed by CBS as a News Copiest for KNX Radio on Sunset Blvd. (near Sunset and Vine). That same year he began a 33 year career at CBS Television City, Hollywood. During this “golden age of television,” he worked as a script copiest, preparing TV scripts for such live programs as, Playhouse 90, Climax!, Shower of Stars, the Jack Benny Program, The Red Skelton Show, and Art Linkletter’s House Party, among others. He was promoted to “Live Operations” departments that consisted of technical and studio scheduling, and became a CBS Executive in 1965. He worked as a liaison for advertising media, providing network commercials for broadcast. In 1973, he became a Production Supervisor, liaising for production companies using TVC Studios. Early on, he worked with popular game shows: Joker’s Wild, Tattletales and The Price Is Right. Tom worked on the talk/variety show, Dinah!, from 1974-78; Three’s Company from 1978-82, and co-supervised The Young and the Restless from 1982-88. He also supervised the prestigious American Film Institute Life Achievement Award programs from 1977-86, including tributes to Bette Davis, Henry Fonda, Alfred Hitchcock, James Stewart, Fred Astaire, Frank Capra, John Huston, Lillian Gish and Gene Kelly. In 1977, Tom proudly arranged Pearl Bailey’s appearance on the Lowell Showboat, as well as several others. After retiring from CBS in 1988, he served on the CBS Alumni Committee.  Tom enjoyed growing hybrid roses and vegetables, and caring for his many canine companions throughout the years. He is a former member of Lowell United Methodist Church. He stayed involved and connected with his many life-long Lowell friends; relatives; his CBS family, Alma Ramirez, Michael Klausman and Saundra Funnel-Reed; and California friends, Leo Barba and Robert Monzi. Though Tom didn’t have any children of his own, he was close with his nieces and nephews, Jane Curtis, Bucky (Kathy) Curtis, Patty (Patrick) Herblet, Deb Curtis, Richie Curtis, Thomas Smith, Gerry Smith, Mark (Jill) Smith, Tonia (John) North; and 20 great-nieces and nephews. He made the 1,873 miles between Hollywood and Lowell seem almost nonexistent to his family, as he never forgot a birthday or holiday card. He was always present to his family, no matter his physical distance from them. Tom said he was “ever grateful for all of the above!” Tom’s family would like to thank Grace Hospice and Green Acres of Lowell for their care. A visitation will be held Saturday, December 3, at 12:00 p.m., with a memorial service immediately following at 2:00 p.m., Roth-Gerst Chapel, 305 N. Hudson, Lowell. Interment Oakwood Cemetery. Memorial contributions may be made to the Lowell Area Historical Museum, 325 W. Main St., Lowell, MI 49331.