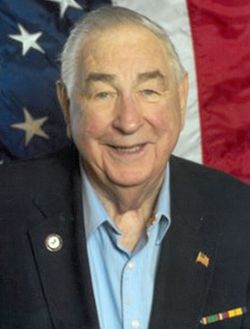 WILBUR JAY HUSTON, age 91 of Grand Rapids, passed away Wednesday, October 12, 2016.  He was preceded in death by his wives, Jeannine Marie (Melton), Rose Mary (O’Neil), and Phyllis J. (Wilks) and, his son, Robert J. Huston.   He is survived by his children, John A. (Cheri), Daniel T., Christopher A. (Beverly), Margaret M. (Michael) Soules, David J. (Laurie), William P. (Debra), Paul J. (Darla), Catherine A. (Karen), James M. (Julie), and Donna M. (Mark) Hogan; sixteen grandchildren, ten great-grandchildren, and four great-great-grandchildren. Jay served in the US Navy during WWII as a Hospital Corpsman at theSNAG 56 Naval Base Hospital in southern England and aboard the USS Navarro in the Pacific. He was a graduate of St. Louis University in Radiological Science.  He worked as the Chief (X-Ray) Technologist at City Hospital in Meadville, PA, Bay View Hospital in Bay Village, OH, and Providence Hospital in Sandusky, OH.  He was then employed by Ilford Ltd. of London, England and Fisher Imaging Inc. of Chicago, IL.  He was a active member of his professional organization, the American Society of X-Ray Technology (ASRT), and served as the President and Chairman of the Board on both the state (Ohio) and national levels.  He was the national ASRT Delegate to President Johnson’s White House Conference on Health and served on the Board of Trustees for the American Registry of X-Ray Technicians. Locally, Jay was an active member and officer of the Dwight Lydell Chapter of the Izaak Walton League of America and of the non-profit Gleaners, a fraternal organization serving the needy.  He also actively participated in the Breakfast Club of Grand Rapids and the local chapter of the Loyal Knights of the Round Table, a fraternal service club.  He was a member of St. Robert of Newminster Catholic Church and its Knights of Columbus Council. Mass of Christian Burial will be celebrated Monday, October 17th at 11:00 a.m. at St. Robert of Newminster Catholic Church, 6477 Ada Drive, Ada, Rev. Leonard Sudlik presiding. Interment Holy Cross Cemetery, 14609 Brookpark Rd, Brook Park, OH. Visitation Sunday, October 16th from 2:00-4:00 p.m. and 6:00-8:00 p.m., with vigil at 7:30 p.m., at O’Brien-Eggebeen- Gerst Chapel, 3980 Cascade Rd. S.E., Grand Rapids. Memorial contributions may be made to St. Robert of Newminster, Haiti Twin Parish Outreach or Hospice of Michigan, 989 Spaulding Ave. SE, Ada, MI 49301.