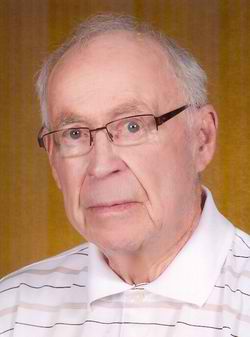 William Edward Myers, aged 90, died peacefully at his home in Grand Rapids on Monday, February 16, 2015. The sixth of seven children of Bert Myers and Veronica (Flynn) Myers, William Edward was born in Lowell on January 26, 1925. He graduated from Lowell High School in 1942. In March 1943, having finished two terms at Michigan State University, he enlisted in the U. S. Navy.

He trained as a signalman, specializing in semaphore and Morse code signaling, before being assigned to a “Liberty Ship,” the Florence Crittenton. Mr. Myers served on seven wartime crossings of the Atlantic Ocean, transporting troops and supplies to England. He also served on D-Day, transporting troops for the invasion of Normandy, making four trips to Omaha Beach and three to Utah, before continuing his service in Italy and India.

Mr. Myers was honorably discharged in May 1946, at which time he resumed his studies at Michigan State. He graduated with a Bachelors in Business degree in 1949. The Fisher Body Division of General Motors then hired him, and he worked for GM throughout the United States and in Spain until his retirement in 1986, when he returned home to Parnell, Michigan.

Mr. Myers was a devoted parishioner of St. Patrick’s Church in Parnell, serving for 10 years on the Finance Committee as well as in other volunteer positions.