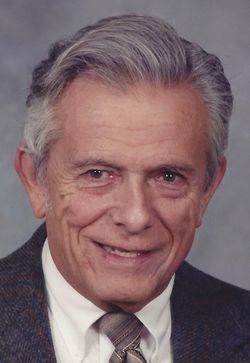 Bill Johnson was born on November 21, 1923 at Butterworth Hospital. He grew up in East Grand Rapids. He attended Lake Drive Baptist Church every Sunday and it was here that he accepted Jesus Christ as his Savior, eventually being baptized when he was 12 year old. At the age of 16, he moved into a home in Cascade that he shared with his parents, brother, and both grandmothers. He graduated from Lowell High School in 1943. It was at Lowell High School that Bill met Vivian Bieri. They had a number of classes together, most memorably English Debate in which they took opposing sides. Vivian recalls seeing Bill for the first time driving his convertible and thought that he must be a movie star due to his cool demeanor and winning smile.
Bill proudly served his country in the United States Army as a Private First-Class in the 79th Division of the 315th Infantry during World War II. Bill was a Code Clerk whose job was to lay communication lines so various army divisions could communicate. Although he never complained, Bill sacrificially lost much of his hearing during his service in the United States Army. Throughout his life, Bill celebrated his service to his country through memorial events such as parades and speaking engagements. He also loved to catch up with his old army buddies at reunions where he was lovingly referred to as “Jr.,” due to his young age when he was drafted.
Always interested in aviation, Bill took flying lessons on the G.I. Bill when he returned from his military service. Vivian and Bill were married in 1949. Carol Lee was born in 1950 and they built their first home on Flat River Drive in Lowell, MI. They were soon joined by William “Larry” Lawrence (1952-1957) and Cinda “Cindy” Lucille (1954-1957). Following the tragic loss of Larry and Cindy in a house fire, Bill, Vivian, and Carol moved to Ada in a home on the Thornapple River. In God’s great mercy and love, they were blessed with two more children, William Lester III in 1960 and Mark Leonard in 1963.
Bill and his brother, Fay, developed Hickory Hills Golf Club (now Watermark) on what had previously been their family farm. They owned and operated this golf course for a number of years. The brothers also founded, owned, and operated Ace Plating Company (now Lacks Industries). They also developed land in the West Michigan area, providing many people with a scenic place to call home.
Following an early retirement, Bill continued to enjoy his many hobbies such as flying, boating, tinkering on engines, woodworking, and keeping up with his many, many friends and relatives. He was a faithful patron of Big Boy and Old Country Buffet for many years. Bill also loved to travel the United States in his beloved motor home; Vivian and Bill enjoyed many extended trips to Florida during the cold winter months. Memories were made in such places as Alaska, the Holy Lands, Switzerland, Amsterdam, and Hawaii. Bill’s many grandchildren were a blessing in his later years and he created countless memories with them that will continue to be shared for generations. His influence and his example will not soon be forgotten.
Bill was a devoted son, a beloved husband, a respected father, an affectionate grandfather, and a loyal friend. He was a dedicated member of both his community and his church; over the years he served as a church deacon, a school board member, a Boy’s Brigade leader, a Sunday School teacher, and a school bus driver. Bill enjoyed a series of vocations over the course of his life; he was a pilot, a missionary, a soldier, an entrepreneur, a mechanic, and a real-estate developer. Bill Johnson filled many roles; however, the role that was nearest and dearest to his heart was as a child and servant of God. He provided his family a strong legacy of faith and devotion to Christ. His family will continue to celebrate his remarkable and eventful life and they eagerly await the day they will be reunited with him for all of eternity.
Visitation will be at Roth-Gerst Chapel, 305 N. Hudson, Lowell MI on Tuesday, March 17 from 5-7:00 p.m. A service celebrating Bill’s life will be held at First Baptist Church of Lowell, 2275 West Main St., Wednesday, March 18, at 11:00 a.m. Memorial contributions may be made to First Baptist Church of Lowell, MI.
Listen, I tell you a mystery: We will not all sleep, but we will all be changed— in a flash, in the twinkling of an eye, at the last trumpet. For the trumpet will sound, the dead will be raised imperishable, and we will be changed. For the perishable must clothe itself with the imperishable, and the mortal with immortality. When the perishable has been clothed with the imperishable, and the mortal with immortality, then the saying that is written will come true: “Death has been swallowed up in victory.” “Where, O death, is your victory? Where, O death, is your sting?” The sting of death is sin, and the power of sin is the law. But thanks be to God! He gives us the victory through our Lord Jesus Christ. Therefore, my dear brothers and sisters, stand firm. Let nothing move you. Always give yourselves fully to the work of the Lord, because you know that your labor in the Lord is not in vain. 1 Corinthians 15:51-58