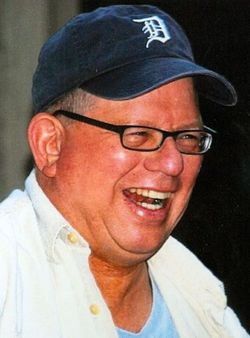 Bill (William) Reed Antonucci, age 68, of Grand Rapids left his friends and family on May 23, 2017. He was preceded in death by his parents Joseph A. and Lorraine Antonucci, and his brother Joseph R. Antonucci, DDS. He is survived by his siblings, Justin and Janis (Antonucci) Chaney of NC, Vera and Jim Antonucci, both of CO, Richard and Mary (Antonucci) Burks of VI, and Mark and Louise (Antonucci) Finkelstein of Grand Rapids. He very much loved all of his nieces and nephews, Joe, Tom, Karen, Meg, Jason, John, Jill, Nikki, Matthew, Sarah, Grace, Elizabeth, Ben; and grandnieces and -nephews Tommy, Lauren, Sydney, William, Emily, Caroline, and Jase; and of course his hospital canine friend, Luna. Bill, a graduate of Catholic Central (1967), U of M and WMU, a special education instructor, a dedicated guitarist, a loyal friend, and a closet family photo-historian spent his final moments with his siblings at his side. Bill loved his guitars, his music, studying music, playing music, writing music, recording music and playing for family. He had a ready melody in his head and never ceased learning to perfect his tunes. He tremendously enjoyed speaking of family, music, and his youthful antics. After retirement, Bill worked at the Grand Rapids Yacht Club in general maintenance and ran a tight ship. He considered all the members of the yacht club his extended family. He loved talking to past commodores who came down to watch the young sailors learn their skills on the water. An avid fisherman, Bill once caught a fish. But we heard about it 500 times. A past resident of Hawaii, Bill never forgot his connections there. He loved island culture and history, and he eventually became an avid scuba diver. Bill was a devoted son, brother, uncle, and friend. His quiet presence, spiked with dry humor, will be missed. Bill sends an extra thank you to the nursing staff at Spectrum Butterworth Hospital. Celebrate with friends and family at a graveside service at Resurrection Cemetery, 11:30, May 31, 2017, immediately followed by a luncheon at the Grand Rapids Yacht Club from 12:30-3:00. In lieu of flowers, the family asks that donations be made to Guitars for Vets at http://www.guitars4vets.org/.